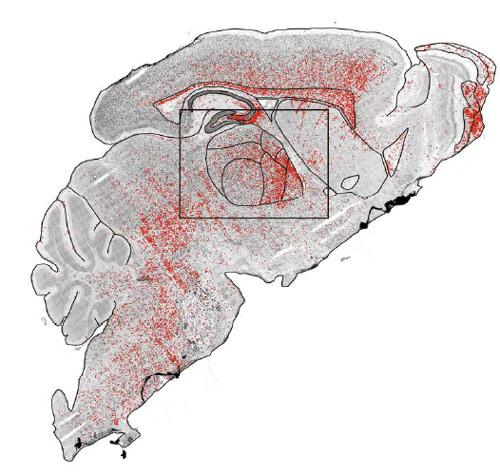 Protein clumps: Small aggregates of FMRP, the protein missing in people with fragile X syndrome, are present throughout the brains of 15-day-old mice.

FMRP, the protein missing in people with fragile X syndrome, localizes in clusters of proteins at neuronal junctions that relay sensory and motor information, according to a study published 23 April in The Journal of Comparative Neurology1.

FMRP regulates the activity of hundreds of other proteins, including many that are linked to autism. Fragile X syndrome is characterized by intellectual disability, sensory sensitivity, problems with motor skills and, often, autism.

FMRP is expressed in every neuron in the brain. However, the symptoms of fragile X syndrome suggest that certain neural circuits, such as those involved in fine motor skills, are disproportionally affected by its absence.

In the new study, researchers looked at fragile X ‘granules,’ which contain clusters of FXR2P protein, and sometimes FMRP and FXR1P as well. A 2009 study showed that these granules form in mice at synapses, the junctions between neurons, in the first six months after birth, suggesting that they could regulate synapse development.

The new study found that the granules are present in the olfactory bulb, which plays a role in scent perception; the cerebral cortex, which plays a role in most higher-order cognitive functions; the thalamus, which relays sensory and motor signals to the cortex; the hippocampus, which is involved in learning and memory; and the brainstem, which relays motor and sensory information to the face and neck. Granules in each of these regions, except the brainstem, contain FMRP.

However, the granules are not evenly spread out within these regions, but are localized to certain neural circuits. For example, granules in the neocortex are located primarily in motor regions.

They are also expressed in the long tracts of neurons that link brain regions, especially in the thalamus, suggesting that they play a role in long-range neuronal communication. Deficits in long-range brain signals have been implicated in autism and fragile X syndrome.

Deleting the FMR1 gene, which codes for FMRP, increases the number of granules, the study found. This is consistent with previous findings in fragile X mouse models, the researchers say.