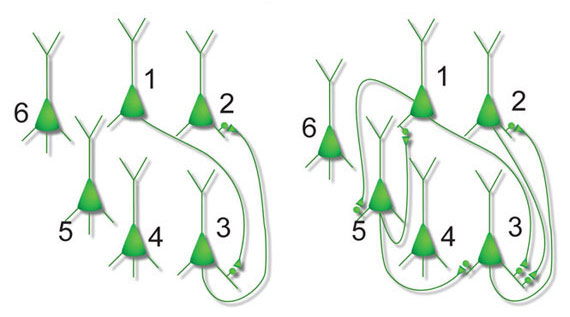 Circuit block: Neurons in the brains of fragile X mice (right) form too many connections, and may not effectively process signals related to working memory.

Circuit block: Neurons in the brains of fragile X mice (right) form too many connections, and may not effectively process signals related to working memory.

Neurons in a mouse model of fragile X syndrome make more connections during a critical period in development compared with controls, but are slower to respond to signals, according to a study published 19 August in Cerebral Cortex1.

As a result, the brains of these mice may be less able to process signals for higher-order cognitive functions, such as working memory, the study suggests.

Individuals with fragile X syndrome have intellectual disability and problems with attention. The connectivity theory suggests that this deficit could be the result of too many short-range and disrupted long-range connections between neurons.

In the new study, researchers looked at pyramidal neurons, excitatory neurons in the cortex that appear early in development, in mice lacking the fragile X gene, FMR1. The neurons are from layer 5 of the medial prefrontal cortex, a brain region that regulates higher-order cognitive functions. This layer contains large pyramidal neurons that connect with the brain stem and the spinal cord.

Neurons from the mutant mice at 2 to 3 weeks of age make nearly twice as many connections with adjacent neurons as those from controls, the study found. However, these neurons are slower to respond to signals and take longer to recover after firing.

Using an equation to model the dynamics of excitatory signaling, the researchers showed that the hyper-connectivity and slower signaling cancel each other out, resulting in the same rate of signaling.

However, the sluggish signals may make the prefrontal cortex less responsive to low-frequency signals, including those responsible for attention and working memory.

Although the differences in signaling disappear by the time the mice reach 3 to 5 weeks of age, 2 to 3 weeks is a crucial developmental window. This suggests that early defects in connectivity can lead to long-term deficiencies in the prefrontal cortex of fragile X mice.