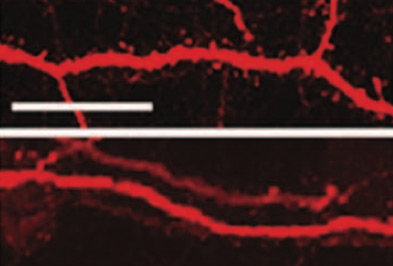 FOXP2, a language gene that is linked to autism, may regulate active connections between neurons by controlling the levels of a protein called SRPX2, according to a study published 22 November in Science1.

FOXP2 modulates synapses by controlling the levels of SRPX2, which is linked to language disorders and to epilepsy, the study found. Mouse pups with dampened levels of SRPX2 in brain regions associated with motor and language skills tend not to cry out when separated from their mothers.

The results show one mechanism by which FOXP2 controls neuronal activity, and they link SRPX2 to autism for the first time. FOXP2 regulates the expression of other genes, including autism candidates CNTNAP2, MET and DISC1, and is known to lower the expression of SRPX2.

The study found that in cultured neurons, excess SRPX2 increases the number of dendrites — branches that receive signals from other neurons. These dendrites are all excitatory, meaning that they receive activating signals rather than inhibitory ones. Loss of SRPX2, or the introduction of an SRPX2 mutant found in people with language problems and epilepsy, decreases the number of excitatory dendrites.