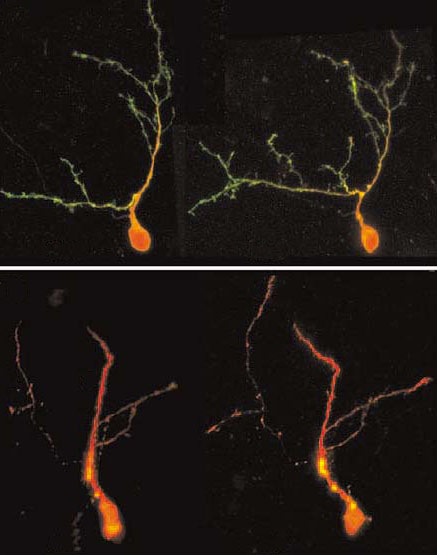 Pruning promotion: Excess copies of the Rett syndrome gene in the brains of tadpole embryos lead to neurons with fewer connecting branches (above) compared with controls (top).

Mice with an extra copy of MeCP2, the Rett syndrome gene, have impaired signaling between neurons in the hippocampus, a brain region that plays an important role in memory, according to a study published 29 February in The Journal of Neuroscience1. The mice show a number of deficits in learning and memory, as well as heightened anxiety and motor deficits.

Another study, published 9 March in PLoS One, shows that expressing extra human MeCP2 in the brains of tadpole embryos alters the shape of dendrites, the signal-receiving branches of neurons2.

Mutations in one copy of MeCP2, which regulates the expression of thousands of other genes, lead to Rett syndrome, a severe developmental disorder that has some overlap with autism. Men with extra MeCP2 also have a number of neurological deficits, including symptoms of autism, anxiety, intellectual disability and motor deficits3.

A study published earlier this year showed that mice with at least two times the typical levels of MeCP2 have anxiety and social deficits, and linked each of these behavioral changes to elevated expression of one of two genes that are regulated by MeCP2.

In the new study, researchers engineered mice to carry an extra copy of MeCP2 specifically in neurons. Compared with controls, these mice are thinner; they are also more likely to fall off a rotating platform and are less likely to enter elevated platforms or brightly lit corridors, suggesting they have anxiety and motor deficits.

The mutant mice also show a number of deficits in learning and memory. Mice with extra MeCP2 that have been taught to associate a sound with a shock freeze for longer than do controls when they hear the sound a day later. They also take longer to forget the association when they repeatedly hear the sound without receiving a shock, and are more likely than controls to investigate an object that they are already familiar with.

These results suggest that the mice are less able to suppress existing memories or that they have greater difficulty in making new ones than do controls, the researchers say.

Neurons taken from the hippocampus of these mice show impaired synaptic plasticity, a process believed to underlie learning, in which the connections between neurons strengthen or weaken in response to experience.

The mice also show enhanced electrical activity in excitatory neurons, which activate signaling in the brain, but not in those that inhibit signaling. An imbalance between excitatory and inhibitory neuronal signaling is one theory for the deficits underlying autism.

In the second study, researchers show that extra MeCP2 in the brains of tadpole embryos leads to altered dendrites, with fewer connecting branches. The dendrites have typical levels of PSD-95, a protein that accumulates at the receiving ends of synapses, the junctions between neurons, however.

This suggests that neurons partially compensate for altered dendrites by increasing the number of synapses, the researchers say.