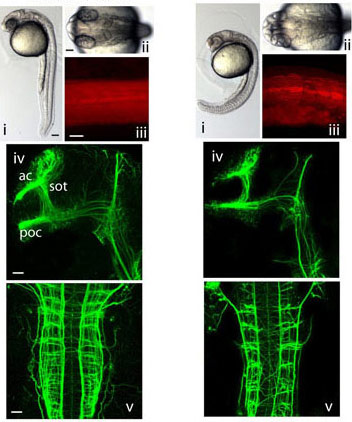 Three variants of DISC1, a gene implicated in schizophrenia and autism, may disrupt Wnt signaling — a pathway that regulates the formation of new neurons in the brain — according to a study published 17 November in Neuron1.

DISC1 may regulate the levels of neurexin 1 and neurexin 3, autism-associated proteins that function at synapses, the junctions between neurons, according to a study published last year4.

Wnt signaling affects the expression of several genes. It has multiple functions in different organs, including regulating the generation of new neurons in the brain. DISC1 is known to bind and inhibit GSK3-beta, a key molecule in the Wnt signaling pathway.

In the new study, researchers sequenced DISC1 in thousands of individuals and identified both common and rare variants in the gene. They focused on three common variants implicated in neuropsychiatric disorders, R264Q, L607F and S704C, and one rare variant, A83V, that can disrupt an important DISC1 binding site. In various experiments, they compared these variants with a control version of the protein.

Of the four variants the researchers tested, only S704C binds GSK3-beta, the study found.

Knocking down the levels of DISC1 protein in cultured human neurons lowers the expression of Wnt-regulated genes, suggesting that DISC1 regulates this pathway.

Blood cells from individuals with the R264Q variant also have lower-than-typical expression of a Wnt-regulated gene. Only the S704C variant rescues this effect.

Increasing DISC1 expression in cultured human cells ups the number of dividing neurons, the study found. And the brains of mouse embryos lacking the DISC1 protein show fewer developing neurons compared with controls. Once again, only S704C rescues this effect, suggesting that the other three could affect the generation of new neurons in the brain.

In zebrafish embryos, lowering DISC1 expression leads to abnormal brain development and a bent tail, which are also features of a Wnt signaling defect. Two of the variants, R264Q and L607F, partially rescue this effect, but the control DISC1 and the S704C variant fully recover normal zebrafish development.

The S704C variant generally has the same effects as the control on neuronal development. However, this variant inhibits the migration of neurons to their correct locations in the brain, the study found.

Another study, published 11 January in The Journal of Neuroscience, reports that neurons that inhibit signals in the brain do not migrate correctly in the brains of mice with lower-than-typical levels of DISC15.