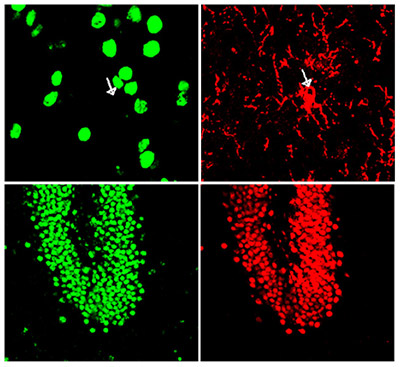 Deleting the Rett syndrome gene MeCP2 from oligodendrocytes, a brain support cell, leads to a mild form of the disorder in mice, according to a study published 27 November in The Journal of Neuroscience1.

Rett syndrome is a severe developmental disorder characterized by motor deficits and a loss of language skills around 2 years of age. It is typically the result of a mutation in the MeCP2 gene.

Although MeCP2 is present throughout the body, removing the gene only from neurons leads to the full range of symptoms in mice. These include problems with motor coordination, anxiety, repetitive clasping of hind limbs, low weight and a life span shortened to about 15 weeks. Restoring MeCP2 in one-quarter of the brain’s neurons alleviates many of these symptoms, according to unpublished results presented in November at the 2013 Society for Neuroscience annual meeting in San Diego.

These data suggest that Rett syndrome is closely tied to MeCP2’s role in neurons. Several other studies have suggested that MeCP2’s function in glia — whose numbers greatly surpass those of neurons — is also important.

Restoring MeCP2 only in astrocytes, which support neuronal junctions, or microglia, the brain’s immune cells, reverses many of the symptoms seen in Rett mouse models.

In the new study, researchers removed MeCP2 from oligodendrocytes, which physically support neurons’ long projections. These mice live to at least 35 weeks and have mild Rett symptoms. About 60 percent show hind-limb clasping but no other motor deficits. The mice are also, unexpectedly, more active than controls.

Conversely, expressing MeCP2 in oligodendrocytes alone alleviates some of the symptoms seen in mice that lack MeCP2, the study found: These mice live about two weeks longer than the full mutants, and 40 percent of them repetitively clasp their hind limbs. The mice also have much stronger hind limbs than the mutants and can hang twice as long from a rod.

The results suggest that MeCP2 plays an important role in all cell types in the brain and that loss of the gene in different cells may lead to distinct symptoms.