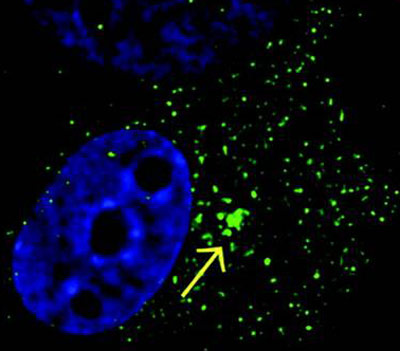 Protein dump: The aggresome, a large collection of aggregated proteins, sits next to the nucleus (blue) of cells and may protect them from the damaging effects of these proteins.

DISC1, an autism-associated protein, can form large aggregates that deplete the amount of functional DISC1 in the cell, according to a study published 14 February in Human Molecular Genetics1.

The study shows that DISC1 aggregates are present in a cellular complex that has been linked to neurological deficits in Alzheimer’s and Huntington’s diseases.

Mutations in the DISC1 gene are associated with both autism and schizophrenia. Its involvement in multiple neurological disorders is supported by studies showing that DISC1 plays a role in several important neuronal signaling pathways. This includes maintaining the levels of NRXN1 and NRXN3, autism-associated proteins that function at synapses, the junctions between neurons, and regulating the generation of new neurons.

DISC1 also aids in the transport of mitochondria, the molecular powerhouses of the cell, to synapses.

In the new study, researchers added a fluorescent molecule to DISC1 and saw that it aggregates into large clumps in about 30 percent of normal neurons in culture. These clumps localize to the same spot as regulatory proteins that are recruited to the aggresome, a large collection of misfolded proteins that forms when the cellular pathway that disposes of faulty proteins is overwhelmed.

Aggresomes are largely believed to be a protective response and are a feature of several neurodegenerative diseases, including Alzheimer’s and Huntington’s diseases.

Once DISC1 is in the aggresome, it cannot return to the free, functional pool of proteins in a cell, the study found, suggesting that these aggregates inhibit DISC1’s function. DISC1 in aggregate form is also not mobile, so unlike free DISC1, it does not travel to the tips of neurons.

Fewer mitochondria move along the neuron in cells with aggregates than in control cells, the study also found. This supports the theory that the DISC1 aggregates could have similar effects in cells as DISC1 mutations.

Why DISC1 aggregates form in some normal neurons is unknown. An environmental factor such as oxidative stress, which some studies have linked to schizophrenia, is one possibility.

To explore whether oxidative stress, which is caused by chemically reactive molecules that can damage cells, triggers DISC1 aggregation, the researchers treated cells in culture with hydrogen peroxide. DISC1 forms more aggregates in hydrogen peroxide-treated cells than in control cells, the study found.