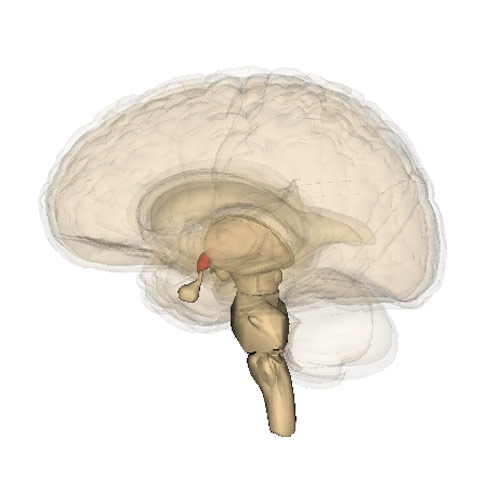 Master switch: There is less brain matter in the hypothalamus, a region that controls body temperature and sleep, in children with autism than in controls.

Children with autism have less brain matter than normal in a region that synthesizes the social hormones oxytocin and vasopressin, according to a study published 29 April in Biological Psychiatry.

However, these children do not show a significant difference in overall brain volume compared with typically developing children of the same age, intelligence quotient (IQ) and gender1.

Some studies have reported that children with autism have larger brains than controls do, but only up to 4 years of age.

In the new study, researchers analyzed the structure of the whole brain using structural magnetic resonance imaging. They scanned the brains of 52 children and adolescents with autism ranging in age from 6 to 20 years, and 52 controls. When the researchers controlled for variations in age, IQ or gender, the group with autism showed only a slight, statistically insignificant, increase in overall brain size compared with controls.

This observation is consistent with research showing that brain size in children with autism begins to normalize after 4 years of age.

The researchers also looked at changes in the volume of gray matter, which contains neurons and housekeeping glial cells. They found that the hypothalamus is smaller in children with autism than in controls, but did not detect differences among any other brain regions.

The hypothalamus coordinates interactions between neurons and hormones secreted by the pituitary gland. The sub-region of the hypothalamus that is altered in the group with autism is responsible for synthesizing oxytocin and vasopressin. Both hormones have been linked to autism.

Oxytocin is believed to enhance the same social skills, such as trust and empathy, that are deficient in autism. Studies have also found that individuals with autism have lower levels of oxytocin in their blood than controls do.