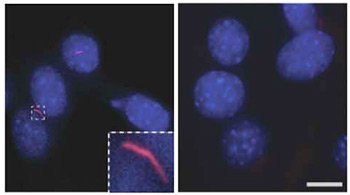 Genes involved in neuropsychiatric disorders tend to be required for the formation of primary cilia — small tentacles on the cell surface that sense the external environment — according to a study published 3 October in PLoS One1.

Primary cilia, which are not involved in motility, are present on almost every cell surface in the body. They respond to chemical messengers that influence neuronal signaling, including dopamine, and can transmit signals from the external environment into the cell.

In a 2010 study, researchers found that lowering the expression of DISC1, a gene linked to autism and schizophrenia, in rat neurons leads to fewer cells with primary cilia2. They saw the same effect in NIH3T3 mouse embryonic skin cells.

In the new study, the same team decreased the expression of 41 different genes in NIH3T3 cells. These genes code for proteins that either interact with DISC1 or are linked to autism, schizophrenia, intellectual disability or bipolar disorder.

Lowering the expression of 20 of these genes alters the number of cilia on the cells, the study found. In contrast, a random screen of 7,784 genes found only 49 that influence cilia numbers3. Autism candidate genes that influence cilia include CNTNAP2, FOXP1 and NRXN1.

The study shows how a number of different genes may function in a common pathway, the researchers say. By identifying these nodes of function, researchers can begin to uncover the basic mechanisms that go awry in disorders such as autism.