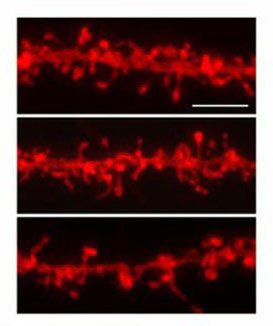 Sparse spines: Neurons lacking a binding partner for an autism-linked protein (above and middle) have fewer signal-receiving spines compared with controls (top).

Studies have identified mutations in the gene encoding IL1RAPL1 in individuals who have autism3 or intellectual disability4. The new work shows that IL1RAPL1 triggers the development of synapses, the junctions between neurons.

Malfunctions at the synapse are thought to play a role in autism, suggesting that ILRAPL1 mutations could underlie the social and cognitive deficits associated with the disorder.

The two new studies both find that IL1RAPL1 is localized at the tips of dendrites, the signal-receiving ends of neurons. Another protein, called protein tyrosine phosphatase delta, or PTPδ, sits at the ends of axons, the signal-transmitting ends of partner neurons.

Binding between IL1RAPL1 and PTPδ induces events that build a synapse between two neurons, according to one study published in the Journal of Neuroscience1. For example, proteins needed for transmitting chemical signals cluster at the axon tip and spine-shaped protrusions appear along the dendrite.

These novel interactions add to the growing catalog of molecular pairings that help construct synapses, particularly those that promote excitatory signals between neurons. Other interactions involve autism-related proteins such as neurexins and neuroligins.