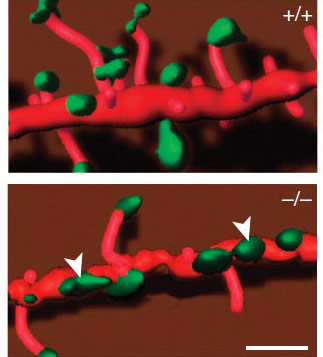 Stumpy spines: PSD-95 (green), a protein that sits at the tip of the spines that receive neuronal signals (top), is mislocalized in neurons that lack neurobeachin (above).

Neurobeachin, or NBEA, an autism–associated gene, may regulate the transport of signaling molecules to neuronal branches, according to a study published 22 November in Nature Communications1.

The study hones in on a possible mechanism by which an autism-associated mutation disrupts the function of synapses, the junctions between neurons.

Synapses are far removed from the cell body of a neuron, so their function depends on the transport of a cocktail of molecules along neuronal projections. This mix of molecules regulates synaptic plasticity — changes in the strength of the connections between neurons — defects in which have been implicated in autism.

In the new study, researchers investigated the effect of NBEA on synapses by looking at cultured neurons from mice lacking both copies of the gene. Because these mice die shortly after birth, they also studied brain tissue from adult mice with one copy of NBEA.

Actin, which mediates transport in a cell, accumulates in the cell body instead of at synapses in the mutant neurons, the study found. In addition, synaptopodin, a protein that is usually found at synapses, is localized predominantly in the cell body and overlaps with actin. These changes suggest that in normal cells, NBEA plays a role in the transport of molecules to the tips of neurons, the researchers say.

The researchers also saw defects in dendritic spines, the mushroom-shaped bodies that generally receive excitatory impulses from other neurons, compared with controls. Immature or malformed dendritic spines are a feature of both autism and the related fragile X syndrome.

Neurons from mice lacking NBEA have fewer dendritic spines than controls do, the study found. The shape of the spines is also different: They lack the typical mushroom-shaped head, and so instead form connections with other neurons on their shafts.

The researchers found that PSD-95, the excitatory molecule, is mislocalized to spine shafts in mutant cells. It is also more abundant in mutant neurons than in controls. By contrast, the localization and amount of the inhibitory molecule, gephyrin, is unaffected, the study found. Neurons lacking NBEA also make more connections with excitatory neurons than do controls.

The neurons in NBEA-deficient mice could be compensating for the changes to dendritic spines by increasing the number of excitatory synapses between cells, the researchers say.