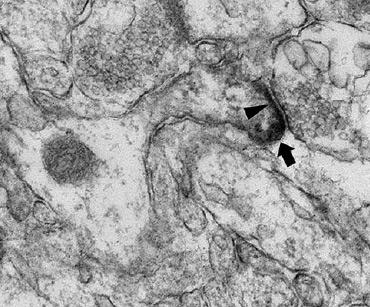 Receiving site: In the hippocampus of juvenile mice, MET is present at the signal-receiving (arrows) as well as the transmitting ends of neurons, in a mushroom-shaped body called the dendritic spine.

The autism-linked protein MET is expressed at the junctions between neurons, or synapses, during early brain development in mice, suggesting that it helps establish the synapses, according to a study published 21 June in The Journal of Comparative Neurology1.

MET sits at the cell surface, initiating a cascade of changes inside the cell in response to its binding a partner molecule. Mutations in MET are more common in people with autism than in controls, particularly in individuals who have both autism and gut problems. In the brain, MET may help strengthen connections between distant regions.

In the new study, researchers looked closely at MET’s location in the brain every seven days during the first three weeks of life in newborn mice. This period is developmentally equivalent to the third trimester of gestation in people, when many brain connections are forming. The researchers looked in two regions: the hippocampus, which plays a role in memory, and the somatosensory cortex, which relays sensory signals through the brain.

By labeling MET with gold particles, the researchers were able to see the protein through an electron microscope, which can magnify cells up to ten million times. In the hippocampus, MET is present at both the transmitting and receiving sides of synapses at days 7 and 14. By week three, it is mostly at the signal-transmitting side. In contrast, in the somatosensory cortex, MET is present primarily at the transmitting ends of synapses from day 7 onward.

In both brain regions, MET is found primarily in axons, the long projections of neurons. It is also present in glia — non-neuronal support cells of the brain.

Biochemical experiments, which can isolate different functional compartments at the synapse, confirmed that MET is present in the active regions of the junction.

The fact that MET’s location changes throughout a key stage of brain development suggests that it may help modulate synapse formation, the researchers say.