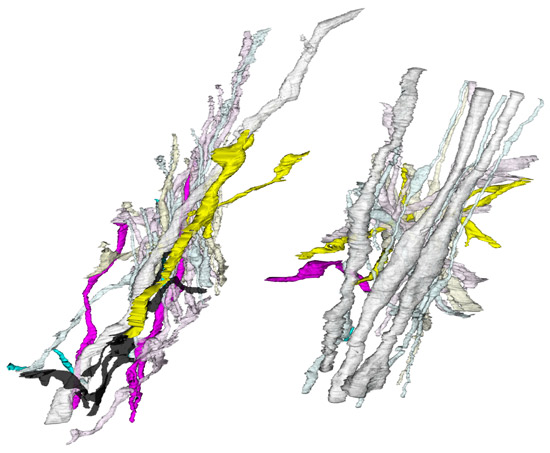 Bundle of nerves: The brains of people with autism show differences in the thickness of neurons, categorized from small (blue) to extra-large (black).

Changes in the bodies of neurons may account for communication deficits in the brains of people with autism, according to a study published 3 November in The Journal of Neuroscience.

Neurons often span lengthy distances, transmitting information across the axon, the long cell body. The researchers categorized axons by thickness based on observations from the postmortem brains of five people with autism and four controls.

The researchers found that the brains of those with autism have fewer extra-thick axons in deeper layers of the anterior cingulate cortex, a brain region responsible for attention. Deeper brain regions are generally populated by neurons involved in long-range connections. The researchers also see more thin axons in regions likely to be involved in short-range connections.

Once axons reach their target region, they form branches that connect to synapses, the junctions between neurons. The researchers show that in the brains of people with autism, a higher proportion of axons involved in short-range connections form multiple branches compared with controls.

By staining for a protein only present in actively growing neurons, the researchers show that more branching is a result of excessive axon growth, rather than less pruning of unnecessary connections.

One limitation of the study is the small number of samples. The researchers control for various factors, such as gender and age at death, but the sample size makes it difficult for these controls to be meaningful.