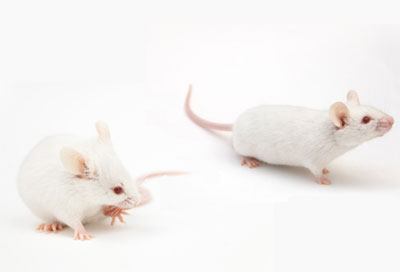 Mixed mutant: Mice with a deletion of the paternal copy of the 15q11-13 chromosomal region show autism-like behaviors.

Mice that model Angelman syndrome or have a duplication of the 15q11-13 chromosomal region have aberrant brain levels of the chemical messenger serotonin, according to a study published 16 August in PLoS One1.

Changes to serotonin and other chemical messengers may account for some of the behavioral symptoms that resemble autism in these mice, the researchers say.

UBE3A is imprinted, meaning that only one copy of the gene, in this case the version inherited from the mother, is active. Duplication of the maternal copy of 15q11-13 leads to symptoms that resemble autism.

Last year, a study in fruit flies showed that UBE3A regulates the production of a family of chemical messengers called monoamines, including serotonin and dopamine2. Both neurotransmitters have been linked to autism.

Some individuals with autism have higher levels of serotonin in their blood and lower activity of a serotonin transporter than controls do. These findings suggest that drugs that balance serotonin levels, such as certain antidepressants, could treat symptoms of autism. Results of clinical trials with antidepressants have been disappointing so far, however.

The latter result suggests that UBE3A is not sufficient for alterations in serotonin levels, as the paternal copy of UBE3A is not expressed. The results are in line with behavioral studies, as only mice with the paternal 15q duplication show autism-like behaviors.

Dopamine levels are elevated in all the mice, regardless of the source of the mutation.