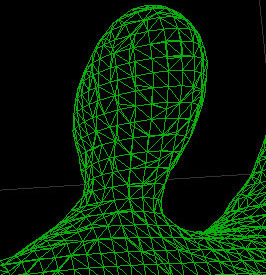 Computerized three-dimensional (3D) modeling shows nerve cell abnormalities in the hippocampus of fragile X mice — and suggests the importance of raising experimental mice in more natural habitats, according to a poster presented Wednesday at the Society for Neuroscience annual meeting.

In the new study, researchers used a computer program to reconstruct the 3D shape and volume of mouse dendritic spines — a total of 14,000 spines so far. The technique “gives a more macro feeling of what’s happening across the neuron,” says Julie Lauterborn, associate researcher in anatomy and neurobiology at the University of California, Irvine.

The team zeroed in on the hippocampus, a region of the brain involved in learning and memory that is dysfunctional in people with fragile X syndrome.

When fragile X and control mice are raised in relatively stark laboratory cages, the dendritic spines of their hippocampal neurons show few differences, the researchers found.

But, says Lauterborn, clear differences between the two groups emerge when the mice are raised in an ‘enriched’ environment — with different chambers to explore, and toys and other elements that more closely resemble a natural habitat.

Under those conditions, the fragile X mice have more immature dendritic spines compared with controls. They show “a huge shift towards smaller spine-head volume,” she says, and have fewer short, stubby spines.

In both fragile X and control mice, the researchers found, dendrites are longer and more complex when the mice are raised in the more natural environment — confirming an effect found in other studies.