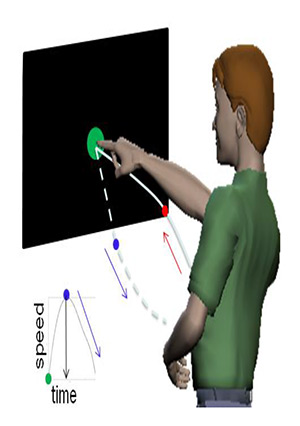 Children with autism and their parents share movement patterns imperceptible to the human eye, according to unpublished results presented today at the 2014 Society for Neuroscience annual meeting in Washington, D.C.

Family members of people with autism often show traits of the disorder themselves. The new study suggests that this so-called ‘broad autism phenotype’ may also include subtle movement characteristics.

People with autism are known to have problems with motor skills. However, these difficulties are thought to be absent in their unaffected siblings.

The ‘micro-movements’ measured in this study are much smaller than the movements typically assessed in tests of motor skills, and are not under people’s conscious control.

The researchers have been analyzing different types of micro-movements over the past several years, finding that people with autism have more random and disorganized movements than controls do. The new study bolsters this picture, and suggests that micro-movement patterns may have a genetic component.

The researchers used motion sensors to record the arm speed of 30 people with autism, 8 healthy adults and 21 parents of children with autism as they pointed and reached toward a target in the middle of a screen about 100 times in a row.

Overall, the speed of an arm during this task follows a bell-shaped curve, increasing from rest and then decreasing as the hand nears the target. But arms typically also show brief increases in speed along the way, which the motion sensors pick up because they take measurements 240 times each second.

Other teams have dismissed these minute variations as ‘noise’ in the data, and scrubbed them out to create a smooth curve. The researchers in the new study had other ideas: “Instead of averaging the noise, we decided to look at the noise,” says study leader Jorge Jose, professor of physics at Indiana University.

The researchers dubbed these increases in speed peripheral spikes, or ‘p-spikes,’ and found that different groups of people show divergent patterns of these speed variations.

In healthy adults, most p-spikes occur at either end of the loop: when beginning to reach the arm outward or at the end of pulling it back. In people with autism, the pattern of spikes “is totally randomly distributed all over the place,” says Di Wu, a graduate student in Jose’s lab who presented the poster.

Typically developing children 3 to 5 years of age also have random patterns of p-spikes, similar to the autism group, the researchers found. This suggests that p-spikes normally become more organized with age, but that this maturation doesn’t occur in people with autism. The autism group in the study included individuals between 10 and 30 years old.

The researchers also measured p-spikes in 14 mothers and 7 fathers who have a child with autism. Surprisingly, most of these unaffected parents have movement patterns like those of their children, and not like those of typical adults. This suggests that genetics plays a strong role in p-spike patterns, the researchers say.

The data from parents show that not all people with random p-spike patterns have autism, so the analysis cannot be used to diagnose autism on its own. But because it is an objective and quantitative measure, it could complement existing behavioral measures in diagnosing the disorder, the researchers say.

What’s more, it provides an index of severity: Among people with autism, those with more random p-spikes are also lower functioning overall.

This sort of analysis could also help track the effectiveness of interventions.

“Clinical trials are typically going to be quite short in duration,” says Joseph Buxbaum, professor of psychiatry at the Icahn School of Medicine at Mount Sinai in New York, who was not involved in the study. Existing measures of autism symptoms may not be able to pick up improvements fast enough to show the promise of an intervention, he notes.

Buxbaum is working closely with Elizabeth Torres of Rutgers University, a collaborator on the new study, to test insulin-like growth factor 1 as a treatment for children with Phelan-McDermid syndrome, an autism-related disorder. The trial will use the micro-movement analysis to assess the drug’s outcome, Buxbaum says. “We hope it might be a sensitive measure of improvement in clinical trials, while also providing a useful measure of motor function.”