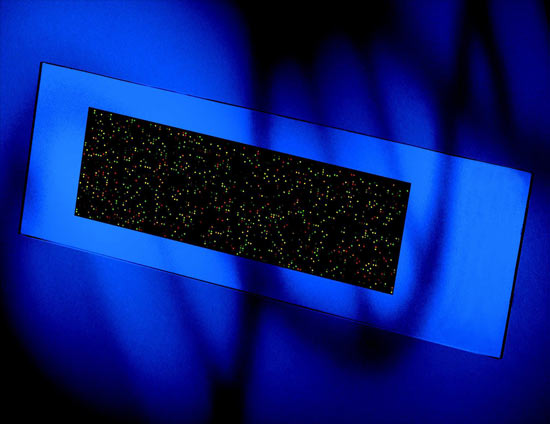 Blue chips: Microarrays are efficient and accurate at detecting autism variants, but are virtually unknown to most pediatricians and family practice doctors.

Chromosomal microarray analysis (CMA), which screens the entire genome for tiny blips in the sequence, should be the first genetic test performed when diagnosing autism, a consortium of clinical geneticists recommends in the 14 May American Journal of Human Genetics1.

The recommendation comes on the heels of an April Pediatrics study that found the test is three times more effective at spotting autism variants than are standard clinical methods2.

Most clinics rely either on karyotyping — which involves looking at chromosomes under a microscope for gross irregularities — or testing for fragile X syndrome, the most common inherited form of autism, by analyzing the FMR1 gene on the X chromosome.

Because these measures only catch the most obvious genetic problems, however, they produce positive results in only about five percent of children tested3.

CMA uses gene chips to pick up more subtle genetic mutations across the genome, making it more likely that abnormalities will be found, experts say.

“It’s one of the fastest growing fields, so certainly more and more labs will adopt the microarray test,” says lead investigator Bai-Lin Wu, director of the genetics diagnostic lab at Children’s Hospital in Boston. The technique itself will also continue to improve, he adds, so that it’s able to detect even smaller abnormalities.

Microarray tests for autism debuted in 2006, but only a few dozen centers in the U.S. have offered it since then, Wu notes.

No one has surveyed the number of families of children with autism who get genetic testing, and experts say the rate varies widely among different regions.

Boston, for example, is home to the Autism Consortium, which includes researchers from a dozen local medical centers who lead large-scale autism studies, including the new Pediatrics study. Families in the area are more likely to opt for genetic testing than are others who don’t live near a large medical center.

Wu’s team tested 933 children between the ages of 13 months and 22 years on all three tests. All of the participants had been diagnosed with autism, but more than 90 percent did not show an abnormality on any of the tests — attesting to the diverse and often mysterious nature of the disorder.

Karyotyping identified abnormalities in 2.23 percent of cases, whereas the fragile X test gave positive results in 0.46 percent, the study found. In contrast, whole-genome CMA tests turned up potential culprits in 7.3 percent of cases.

These results come as no surprise to most researchers in autism genetics, who for the past two years have rallied around copy number variations — DNA deletions and duplications — that turn up with microarray analysis.

But CMA is virtually unknown to most pediatricians and family practice doctors, notes Nancy Mendelsohn, medical director of genetics at Children’s Hospitals and Clinics of Minnesota.

“I think it’s a great paper, and I commend them — it was badly needed,” Mendelsohn says.

The same sentiment is expressed in the new consensus report from the International Standard Cytogenomic Array Consortium, a group of researchers from clinical genetics laboratories. After reviewing 33 studies, the group found that CMA finds a genetic cause of autism in up to 20 percent of all individuals tested, significantly higher than the 5 percent yield of karyotyping.

CMA has been slow to catch on mainly because of cost: depending on the type of DNA chip used, a test can run upwards of $1,500 per patient, about three times the price of karyotyping or fragile X testing. Not all insurance companies cover CMA tests.

When cost isn’t an issue — in Canada, for example — the situation is quite different.

“The system in the United States is much more difficult than ours in Canada because you have to fight the insurance companies all the time,” notes David Chitayat, professor of pediatrics and medical genetics at the University of Toronto.

Thanks in part to CMA, Canadians have seen a surge in genetic testing services. Last year, the Canadian Ministry of Health spent about $9 million on genetic tests, up from $1 million five years ago, Chitayat says.

Microarray tests may actually save money in the long run. In the U.S., a child suspected of having autism may be subjected to a litany of pricey tests, including brain imaging, several genetic tests and electroencephalography, which involves measuring brain waves through electrodes on the scalp.

Although genetic tests help only a fraction of individuals with autism, they provide valuable information to families. For example, information on an inherited mutation could inform a couple’s reproductive decisions.

Test results could also help families find the best option for treatment or behavioral therapy. For example, certain deletions on the chromosomal region 16p can also lead to epilepsy, speech delays, heart defects or even obesity.

“If you have the [genetic] answer, you can give that family more information about what we expect for the child’s future,” Mendelsohn says.