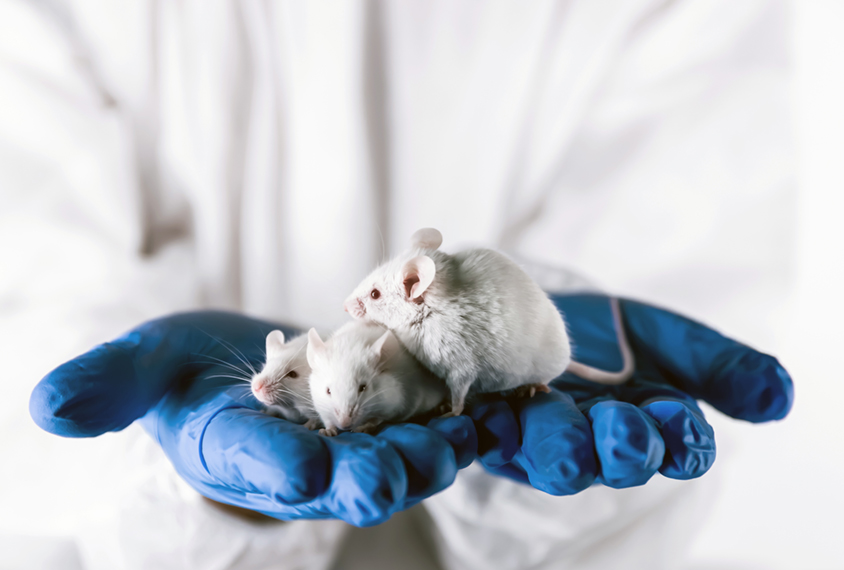 Social creatures: Mice missing one or both copies of the autism-linked gene POGZ tend to be extremely social, like people with mutations in the gene.

Mutations in POGZ, a gene strongly linked to autism, lead to a signaling imbalance in multiple brain regions in mice, according to two new studies.

The results fit with the signaling imbalance theory of autism, which suggests that the brains of autistic people have too little inhibition or too much excitation.

People with mutations in POGZ often have autism or developmental delay. They also tend to have small heads and, in contrast with most autistic people, to be unusually social. In a study published in February last year, researchers found that mice designed to be deficient in POGZ protein have some of those same traits.

The two new studies used mouse models with different mutations in POGZ to identify the brain changes that may lead to these traits. Both found an imbalance of excitation and inhibition in distinct brain circuits in mice missing at least one functioning copy of the gene.

Despite this similarity, many of the other findings in the two papers differ, including how the mouse models perform on behavioral tasks.

Thanks to advances in gene-editing technology, research groups are able to study their own unique mouse models of a condition — a capability that comes with both strengths and weaknesses, says Alex Nord, associate professor of neurobiology, physiology and behavior at the University of California, Davis, who was not involved in the study.

The upside is that modeling different POGZ mutations captures the genetic diversity we see in people, he says. But as a result, findings may not be consistent across teams.

“It will take a while before we can fit all of these puzzle pieces together,” he says.

In one of the new studies, researchers made mice with mutations in either one or both copies of POGZ. Because mice that have no functioning copy of POGZ throughout the body die in the womb, the researchers engineered animals in which the mutations crop up around day 11 of embryonic development and only in the nervous system.

The mice mimic many of the traits seen in people, the researchers found: The animals have unusually small brains and bodies, difficulty with learning and motor function, and increased sociability. Mice missing both copies of the gene have more severe traits than those missing one copy.

The POGZ-deficient mice also produce fewer new neurons during embryonic development and later in life, compared with controls. This dearth could explain the mice’s small brains, says co-lead investigator Sagiv Shifman, professor of genetics at the Hebrew University of Jerusalem in Israel.

Other genes, especially those linked to the formation of new neurons and the signaling between neurons, are expressed more in certain brain regions in POGZ-deficient mice than in wildtype mice, the team found. This result supports previous findings that POGZ helps repress gene transcription. And the gene-expression changes were most prominent in the cerebellum, a brain area thought to control movement and timing.

When the team recorded the electrical activity of cells in the cerebella of mice with POGZ deficiency, they found that the animals’ Purkinje cells, which provide output from the cerebellar cortex, were less active than in wildtype mice. When the researchers directly stimulated the cells, though, they responded normally, which indicates that the decrease in electrical activity is not due to any alterations within the cells themselves, says co-lead investigator Yosef Yarom, professor of neurobiology at the Hebrew University of Jerusalem.

Increased activity from the cerebellum could have widespread effects on how the brain coordinates activities and makes predictions, Yarom says.

In the other new paper, researchers engineered mice that have only one functioning copy of POGZ because of a different mutation. The team focused on a specific behavioral deficit that did not appear in the other mouse model: When placed into an elevated maze with two open arms and two closed arms, this set of mice spends more time exploring open areas of the maze. Wildtype mice typically avoid those areas — likely out of fear of being too exposed.

According to previous research, this anxiety-related behavior depends on the activity of neurons in the ventral hippocampus, a brain region tied to spatial learning and memory, and the medial prefrontal cortex, typically associated with decision-making. Neurons in the ventral hippocampus send excitatory signals to the medial prefrontal cortex, forming a neural circuit that, when functioning properly, may help mice avoid areas that make them feel vulnerable.

The researchers recorded neural activity in the two regions using electrodes while the mice moved through the maze. In wildtype mice, neurons in these two regions synchronize their activity, particularly when the animals approach the open areas of the maze. But in POGZ-deficient mice, activity in these regions does not line up.

This lack of synchrony may impair the mice’s ability to recognize when they should be nervous about their surroundings, says lead researcher Vikaas Sohal, associate professor of psychiatry at the University of California, San Francisco.

To study this asynchrony, Sohal and his colleagues injected the mice with a dye that traces outgoing signals from excitatory neurons in the ventral hippocampus. This enabled the researchers to pinpoint individual cells in the medial prefrontal cortex that receive excitatory signals from the dyed cells.

The team took slices of the mice’s brain tissue and measured the activity of the targeted cells in the medial prefrontal cortex. Excitatory neurons in POGZ-deficient mice and wildtype mice had similar activity, they found. But inhibitory cells in the model mice received significantly less signal compared with controls.

If the inhibitory cells are less active, the medial prefrontal cortex may struggle to dampen the activity of other excitatory signals that come into the region, the researchers say.

“It prevents the hippocampal signals from being transmitted as faithfully as they normally would be,” Sohal says.

Even though the two teams studied different brain regions and used different mouse models of POGZ deficiency, both found alterations to the balance of excitation and inhibition.

And in both cases, the cells are still functioning typically when they receive normal signals, Yoram says, but some of those incoming signals are altered in the POGZ-deficient mice.

Because the circuits studied are so different, it is not possible to directly link them, says Joseph Dougherty, associate professor of genetics and psychiatry at Washington University in St. Louis, Missouri, who was not involved in either work.

One way to connect the findings would be to figure out what the underlying cellular mechanism is that can explain the changes in the circuits, such as alterations in the number of synapses or receptors, Dougherty says. “I think those are interesting questions to look at next.”

Another important question to address is whether restoring the activity in those circuits to typical levels would make the mice behave more like controls. Shifman and Yoram plan to explore this question using drugs that can affect levels of brain activity.

Sohal and his colleagues are looking into whether the balance of inhibition and excitation in the brains of POGZ-deficient mice is also disrupted in other circuits.