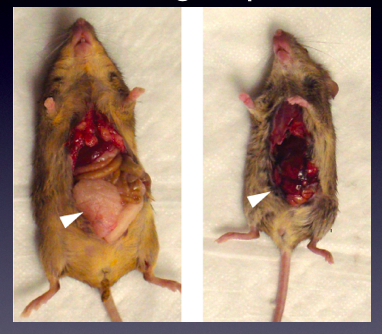 Tiny tails: Mice lacking a copy of 16p11.2, one of the best-known autism-linked regions, are extremely thin (right), and lack a fat pouch in their stomachs (arrow).

Mice lacking one copy of the autism-linked 16p11.2 chromosomal region are thin, deaf and show repetitive behaviors. They also have altered proportions of neurons in their brains, particularly those that express the chemical messenger dopamine. The unpublished results were presented Sunday at the 2012 Society for Neuroscience annual meeting in New Orleans.

The results are notable because they are inconsistent with symptoms in people with the deletion. People with the 16p11.2 deletion tend to be overweight, for example, and don’t have hearing problems.

This could be because the brain structures in mice and people have different effects on behavior, says Ricardo Dolmetsch, assistant professor of neurobiology at Stanford University in California. Still, they may be similar enough that the mice can be used to test therapies for autism, he adds.

Deletion of the 16p11.2 region, which encompasses 29 genes, is thought to occur in about one percent of people with autism. People with the deletion have intellectual disability, repetitive behaviors, obesity, a large head size and, in about 30 percent of cases, autism.

Dolmetsch’s team made a mouse lacking one copy of this region. Another team, led by Alea Mills of Cold Spring Harbor Laboratory in New York, has also created mice with the deletion, but the two sets of mice have different genetic backgrounds.

The Mills mice are also deaf and thin, but they have severe repetitive behaviors, which Dolmetsch sees in only a small percentage of his mice.

“Our endpoints are quite different, but I think we’re all actually singing the same song. By a number of measures these mice are not normal,” says Gary Landreth, professor of neurosciences at Case Western Reserve University, who is characterizing Mills mice.

The thinness may be the result of the pups not being able to suckle properly. Because they are the offspring of a genetic cross, some mice in every litter do not have the mutation. The mutant mice may have trouble competing with the normal littermates, in part because they vocalize less and so receive less attention from their mothers.

Up to 80 percent of these mutant pups die as a result, but when researchers remove the healthy mice from the same litter, as many as 60 to 70 percent survive, says Mu Yang, a postdoctoral fellow in the laboratory of Jacqueline Crawley at the University of California, Davis MIND Institute. The Crawley lab led the behavioral characterization of the Dolmetsch mice.

These mice show just as much interest as controls do in another mouse in their cage, and most of them do not show repetitive behaviors. However, about ten percent of the mice obsessively back flip and “if they do it, they do it a lot,” says Yang.

The repetitive behavior is just one example of the diversity of symptoms in mice with the same mutation, says Dolmetsch. “All the mice are screwed up, but they are screwed up in very different ways.” People with the deletion similarly show a wide range of different symptoms, he notes.

Dolmetsch’s team also looked in detail at the brains of the mice. The mice’s cerebral cortex is slightly enlarged, whereas their corpus callosum, which connects the two hemispheres of the brain, is smaller than in controls.

These differences may be the result of altered feedback between brain regions, says Thomas Portmann, a postdoctoral fellow in Dolmetsch’s laboratory.

The researchers are investigating how these alterations relate to the behavioral features in the mice and to symptoms seen in people.