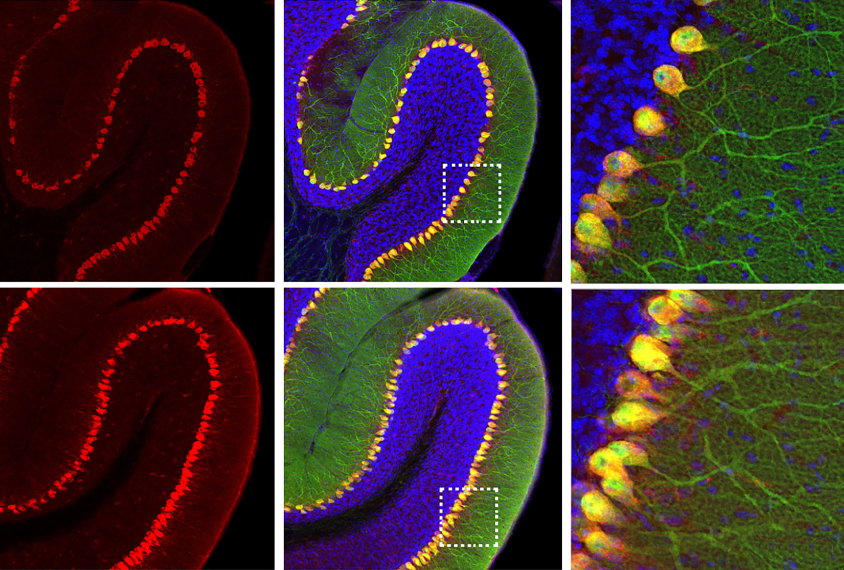 Mice lacking a gene that controls the body’s internal clock have lowered social motivation and impaired motor skills, according to a new study.

But it’s unclear whether disruptions to the clock drive the behavioral differences, several autism researchers say.

Many people with autism have trouble sleeping, which hints at problems with their circadian rhythms — bodily processes that operate on a 24-hour cycle. Some genetic animal models of autism have altered circadian rhythms, too, suggesting that genes linked to the condition also play a role in timekeeping. But less research has examined the reverse — namely, whether alterations to the body’s clock can independently contribute to autism.

“It’s a completely opposite direction that actually is very important in terms of understanding the pathogenic mechanisms of autism,” says lead investigator Ruifeng Cao, assistant professor of biomedical sciences at the University of Minnesota in Minneapolis. “But it’s very rarely studied.”

To address this question, Cao and his team created mice lacking the gene BMAL1, which regulates circadian rhythms throughout the body. Removing this gene altered the animals’ social, repetitive and motor behaviors. Such mice also have unusual day-night cycles, previous work has shown.

The observed traits may not result from circadian disruption, however, says Jonathan Lipton, assistant professor of neurology at Harvard University, who was not involved in the work. BMAL1 is crucial in many processes, such as cell stress, and the brain tends to operate poorly without it, he says. “The question, then, really is, ‘Why are circadian rhythms so disrupted in autism?’ And I’m not sure this paper addresses that specifically.”

“I can’t fault these guys for not answering this,” he says. “I’m not sure it’s answerable yet.”

In a series of behavioral tests, the BMAL1 mice didn’t show the usual preference for interacting with a mouse over an empty wire cup, though, like controls, they socialized more with a new mouse than with a familiar one. And compared with controls, the model mice groomed more frequently, spent more time repetitively tracing their steps and buried fewer marbles — considered proxies for the repetitive behaviors seen in autistic people.

In a test of motor skills, the model mice struggled to walk along a rotating rod and, unlike the controls, didn’t improve with training. The finding prompted the researchers to examine the animals’ cerebellum, Cao says, because the region is important for movement.

Purkinje cells — cerebellum neurons that communicate with the rest of the brain — were larger and less active in the model mice and had denser, more immature branches than the controls’ cells did.

Across the cerebellum, expression levels of 444 genes, including 19 linked to autism, were either increased or decreased in the model mice. And a protein complex called mTORC1, which regulates protein synthesis, was overactive.

Giving the mice the diabetes drug metformin normalized both their mTORC1 and Purkinje cell activity and reversed some of the behavioral changes. The drug also reverses some behavioral and brain impairments in mice that model fragile X syndrome, Cao and his colleagues have previously shown.

Knocking out BMAL1 in only Purkinje cells decreased the animals’ interest in new mice and increased their marble burying. But it did not alter the time of day they ran on a wheel, suggesting their circadian rhythms are largely intact.

The findings suggest that changes in social behavior can occur from circadian disruptions in specific circuits, such as those in the cerebellum, Cao says.

The findings were published in Molecular Psychiatry in March.

Looking for autism traits in a circadian model is “a great approach” to understanding the “uncanny link” between autism and circadian genes, says Thomas Jongens, associate professor of genetics at the University of Pennsylvania in Philadelphia, who was not involved in the work.

It’s possible that circadian genes such as BMAL1 also have roles in pathways that affect social behavior, he says, suggesting it’s not the circadian disruption per se that contributes to autism traits in animal models or to autism in people.

“How it’s all linked is going to keep us up at night for many nights,” Jongens says.

Researchers don’t have a good understanding of circadian rhythms in the brain as a whole, Lipton says, making it difficult to answer questions about how they may influence social behavior, which is also complex and not well understood.

In the future, researchers could knock down BMAL1 only at specific times during development or record circadian activity in cells and check if it aligns with behavioral differences, he says.

Cao says his team is studying whether the behavior changes they observed are specific to BMAL1 or could result from perturbances to different molecular clock genes. They also plan to further probe the mechanisms by which BMAL1 affects behavior, he says.