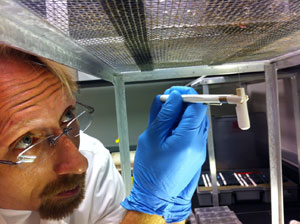 People with Phelan-McDermid syndrome, which causes severe intellectual disability and is often accompanied by autism, also have a blunted response to pain.

Research presented at the 2012 Society for Neuroscience annual meeting in New Orleans shows for the first time that mice modeling the disorder also have higher pain tolerance. The animals’ spinal cords have a larger number of active neurons and low expression of various proteins involved in neuronal connections than do those of controls, though it’s not yet clear how this contributes to pain processing.

Impaired pain processing is a major concern for parents: Children who don’t pay attention to pain can easily hurt themselves or fail to report injuries, for example.

Children with Phelan-McDermid have long been known to be insensitive to pain, but little research has focused on why, says Orion Furmanski, a postdoctoral researcher in Roger John’s lab at Johns Hopkins University in Baltimore, who presented the research. It’s not clear whether the problem resides in the brain, the spinal cord or a combination of the two.

The syndrome, caused by a deletion of a section of chromosome 22, isn’t the only autism-associated disorder with abnormal pain sensitivity. A family survey conducted earlier this year among parents of children with a duplication of the 15q11-13 chromosomal region found that more than 80 percent of parents reported that their child has high pain tolerance. Researchers studying fragile X, Rett and Smith-Magenis syndromes report similar problems.

“One possibility is that the damage-sensing nerves and spinal cord aren’t relaying a sufficient signal to the brain,” says Furmanski. Another possibility is that the parts of the brain that create an emotional response to pain — highlighting the sensation of pain as a negative experience — are impaired. It is also possible that people with the disorder, who have trouble with language, cannot relate their pain experience, he says.

Furmanski and his collaborators turned to mice with a truncated copy of SHANK3, a gene within the chromosome 22 region that is thought to be the prime cause of Phelan-McDermid syndrome. SHANK3 codes for a scaffolding protein that is important for maintaining synapses, the connections between neurons.

The SHANK3 mice and controls responded similarly to acute pain tests, such as mild heat and light touch, suggesting that the nerves and reflexes are working properly. But their behavior diverged when the animals were given a nerve injury, a model for chronic pain. After several days, the controls became more sensitive to touch, but the mutant mice showed no change.

Though Furmanski found some differences in protein expression and activity in spinal cord neurons, it’s not clear how these contribute to higher pain thresholds, and whether the problem lies in the brain or the spinal cord.

“Next we have to look at the part of the brain that controls the emotional aspect of pain,” says Furmanski.

The researchers plan to delete SHANK3 from specific parts of the nervous system to determine which areas are essential for the boost in pain tolerance. They also aim to to test whether glutamate, a chemical messenger disrupted in SHANK3 mice, is involved in pain processing.

Furmanski speculates that the deficit lies in pain-related learning. “The purpose of pain is to teach you not to do something dangerous again,” he says. “If there are deficits, the child may not learn not to touch the hot stove.”

These deficits may be related to other problems in cellular learning — the cells’ ability to rewire their connections in response to new information — seen in autism. Pain learning uses molecular mechanisms similar to those in other types of learning but in different parts of the brain.

Although abnormal pain processing occurs in a number of autism-related disorders, it’s unlikely to have the same underlying cause in each case. Fragile X and Phelan-McDermid syndrome have flaws in an excitatory chemical messenger called glutamate, whereas 15q11-13 duplications affect signaling of the inhibitory chemical messenger gamma-aminobutyric acid, or GABA.

“It is both baffling and intriguing that such divergent cellular mechanisms all appear to converge on a few common behavioral pathways, one of which is the expression of pain,” says Furmanski.