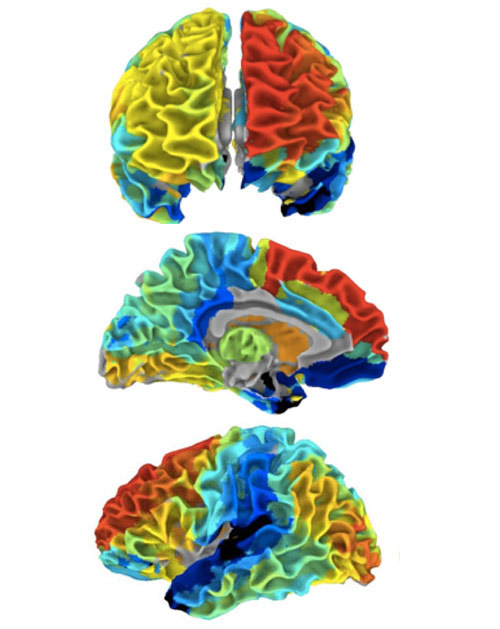 Heat map: Brain regions are each responsible for a wide range of functions (with warmer colors indicating more diversity), such as the processing of memory or emotion.

Heat map: Brain regions are each responsible for a wide range of functions (with warmer colors indicating more diversity), such as the processing of memory or emotion.

Scientists are analyzing more than 7,000 studies of functional magnetic resonance imaging (fMRI) to refine the role of various regions of the brain, according to unpublished work presented in a poster Monday at the 2011 Society for Neuroscience annual meeting in Washington, D.C.

Neuroscientists have long used fMRI, which detects blood flow in the brain, to determine which brain regions are responsible for certain tasks. In these cognitive experiments, researchers ask participants to perform a task that relies on a particular ability, such as paying attention, while they scan the brain for active regions.

The body of literature using fMRI is valuable, but small studies interpreted in isolation are less so, says lead investigator Michael Anderson, assistant professor of cognitive science at Franklin and Marshall College in Pennsylvania.

“We’ve produced literally terabytes of data over the past 15 to 20 years and each study gets analyzed once, for whatever the lab is interested in, and then sort of tossed,” he says.

One shortcoming of fMRI is that blood flow is an indirect measure and could be the result of a signal that began elsewhere in the brain. It is also too simplistic to assume that individual brain regions are uniquely responsible for complex functions, Anderson notes.

Anderson and his colleagues analyzed thousands of fMRI studies to ask just this question: Is the brain divided up into different areas that each play a different role in cognition? “When you look at individual studies it looks that way, but when you look at multiple studies it doesn’t look that way at all,” says Anderson.

In their meta-analysis, the researchers focused on 11 different cognitive tasks, such as working memory, attention and emotion, and the regions of the brain associated with those tasks.

Rather than any one individual region being responsible for a single task, the analysis found, it’s the unique pattern of other regions with which it communicates that influences its function.

For example, in another poster at the meeting, the same team presented data showing that the amygdala and the hippocampus form more connections during memory and emotion tasks on the right side of the brain than on the left.

The researchers also challenge the traditional labels assigned to the tasks that inform brain imaging.

When the researchers aggregated all the tasks that mapped to particular regions, they uncovered some surprises. For example, they found that humor, which is generally believed to be an emotional response, maps to brain regions associated with semantic memory, the ability to learn high-level concepts.

The researchers are also looking at 200 studies on individuals with autism to investigate the connectivity hypothesis. This theory holds that in autism brains, short-range brain connections are stronger, and long-range connections are weaker, compared with controls.

There are numerous studies that can be based on this approach, says Anderson. “I tell my students: We have a database of answers, we’re just waiting for the questions.”