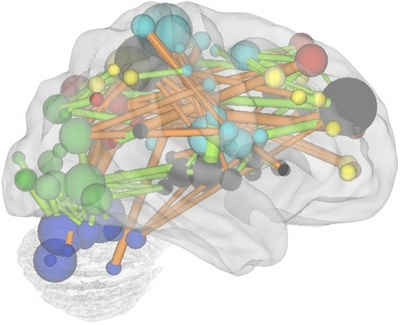 Individuals who carry an autism-linked common variant in the MET gene have abnormally low brain connectivity, according to unpublished research presented Tuesday at the 2011 Society for Neuroscience annual meeting in Washington, D.C.

The effect is especially pronounced in children with autism who carry the risk variant, the study found.

“At a minimum, this work suggests that genetic factors, such as the MET receptor, should be taken into consideration when interpreting correlational imaging data,” says Jeffrey Rudie, a graduate student in Mirella Dapretto‘s laboratory at the University of California, Los Angeles, who presented the work.

Many imaging studies have reported that the brains of individuals with autism have weak long-range and excessive short-range connections compared with healthy controls. These connectivity problems could underlie the characteristic social problems of the disorder, researchers say.

“Complex social behavior is known to rely on the rapid and dynamic integration of many different brain regions,” Rudie says.

The new study investigated whether variants in the MET gene affect these connectivity patterns.

MET is a multi-tasker: It helps regulate the cells of the immune system and the gut, and in the brain it is important for neuron migration and the formation of synapses, the junctions between neurons.

Individuals who carry a common ‘C’ nucleotide base in a specific spot of the MET gene have a higher risk of developing autism than those who carry a ‘G’ variant, according to several studies. In April, researchers reported that mice missing MET have connections in the cortex that are twice as strong as those in controls.

In the new work, the researchers used magnetic resonance imaging to measure the structure and function of connections in the brains of people with autism and healthy controls. They also screened the participants’ blood for MET variants.

The researchers measured the synchrony of spontaneous brain activity between regions using a technique called ‘resting-state functional connectivity.’ They focused on the ‘default network,’ which is active when daydreaming and has been linked to autism. The primary regions of this network, the posterior cingulate and medial prefrontal cortex, are known to show high expression of MET.

Analyzing scans from 38 children and adolescents with autism and 33 healthy age- and intelligence quotient-matched controls, the researchers found that the autism group shows weaker synchrony between hubs of the default mode network. Within the autism group, individuals carrying the C variant in MET have weaker connections than those carrying the G variant, the study found.

A similar relationship between genetic variants and brain connectivity emerged when the researchers looked at structural connections. Using a method called diffusion tensor imaging, they mapped the white matter tracks across the whole brains of 46 children with autism and 38 controls.