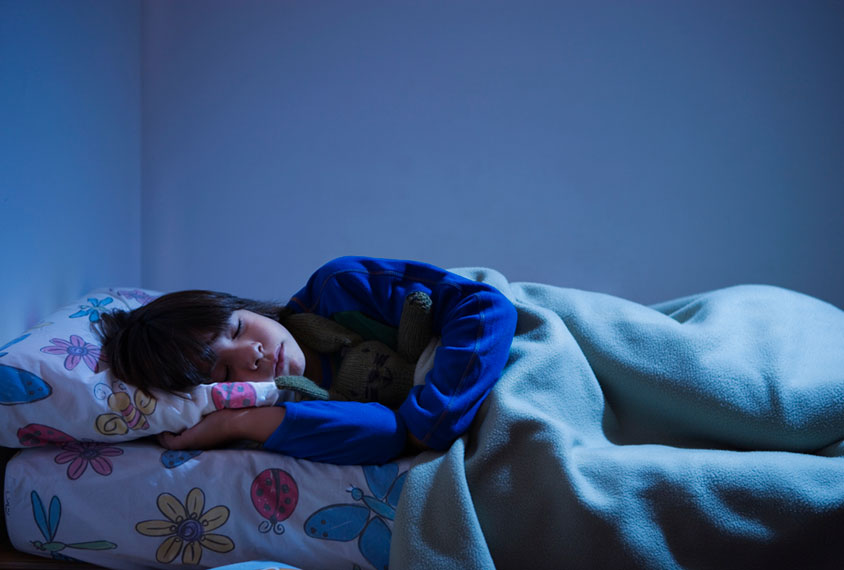 Melatonin is safe for long-term use in autistic children who have difficulty sleeping, according to a new study1.

The study tracked the sleep hormone’s effects in autistic children over a two-year period. Melatonin has previously been suggested as a sleep aid for children on the spectrum, but the new study is the first to systematically assess its long-term safety.

Up to 80 percent of autistic children struggle to fall or stay asleep. These difficulties can exacerbate problems with learning, behavior and overall quality of life, says lead investigator Beth Malow, professor of neurology and pediatrics at Vanderbilt University in Nashville, Tennessee. Helping children get more sleep, she says, may alleviate these issues.

“[Good sleep] can improve and mitigate a lot of problems, so that kids can focus better and do better in school and therapy, and also it can impact the family quality of life,” Malow says.

Improving sleep hygiene — by having a quiet bedtime routine and keeping devices out of the child’s room at night, for example — is the first step to better sleep, Malow says. But when that is not enough, many doctors and families also turn to melatonin, a hormone that is produced in the brain and promotes sleep. Melatonin is available as an over-the-counter supplement in the United States and by prescription in many other countries.

A few small studies have shown that melatonin can improve the quality and duration of sleep for children with autism2. But questions remain about the hormone’s long-term safety, particularly in regard to puberty.

Melatonin levels typically drop during puberty, a fact that has raised concerns that taking it could delay or otherwise alter sexual maturation.

“There has always been concern about what are the long-term consequences of taking it, because melatonin is a hormone, and we don’t normally think of hormones as things you can take without consequences,” says Craig Canapari, director of the Pediatric Sleep Center at Yale New Haven Hospital, who was not involved in the study.

Malow and her team set about investigating these concerns, building off an earlier study of a slow-release prescription preparation of melatonin called PedPRM. That study tested the compound in 119 children aged 2 to 17 years, most with autism and a few with Smith-Magenis syndrome, over a 13-week trial period. It found that PedPRM improves sleep significantly better than a placebo3.

In the new study, 80 of the same children took melatonin for an additional 91 weeks — for a total of two years — with an option to periodically increase the dosage as needed. The improvements in sleep and quality of life persist long term, the researchers found. Some children experienced daytime fatigue and sleepiness, mainly at times when their doses increased.

However, the participants developed as would be expected, indicating that melatonin does not interfere with puberty.

“It was really important to us to get out in the literature that puberty was not delayed,” Malow says.

The study did not include a group of children given only a placebo. Still, it adds to the growing evidence that melatonin is safe and effective for children with autism, says Jeremy Veenstra-VanderWeele, director of child and adolescent psychiatry at Columbia University, who was not involved in the study.

“It really suggests that this is the sort of treatment that we should be thinking about when we’re seeing this incredibly common problem in children with autism,” he says. The study was published in January in the Journal of the American Academy of Child and Adolescent Psychiatry.

PedPRM is a tiny pill, just 3 millimeters in diameter, designed to be easy for children to swallow and to slowly release melatonin throughout the night. (The study was funded in part by Israel-based Neurim Pharmaceuticals, which makes PedPRM; Malow has been a paid consultant for the company.)

PedPRM is approved for use in several European countries, where melatonin is a prescription drug, but it is not available in the U.S. Malow says it is currently under review by the U.S. Food and Drug Administration.

PedPRM’s safety and efficacy may apply to other over-the-counter, prolonged-release melatonin supplements, Canapari says, particularly when compared with the known risks of poor sleep.

“The fact is, we do know that there are very serious consequences for children and families for chronic sleep deprivation,” Canapari says.

Still, he says it would be useful to have a regulated version of melatonin in the U.S. that is backed by data. Because melatonin is considered a food supplement in the U.S., it is not subject to the same quality-control measures as prescription drugs are. A 2017 analysis of 31 melatonin supplements in Canada found that their actual melatonin levels ranged from 83 percent less to 478 percent more than the labeled amount, with quantities of the active ingredient varying by as much as 465 percent in different batches of the same product4.