Imagine being confined for at least half an hour to a dark, claustrophobic tunnel, in a machine so obnoxiously loud that it sounds like you’re in an oil drum with a jackhammer pounding on the outside. That’s what’s involved in magnetic resonance imaging (MRI): an experience enough to make even the bravest among us flinch.

Now imagine asking an autistic child to do the same.

It quickly becomes clear why MRIs, even apart from a few technical shortcomings, are at best a limited tool for examining the brains of children with autism.

Positron emission tomography, or PET scanning, is equally problematic, not least because it requires that the child be injected with a radioactive isotope.

A third option, electroencephalography (EEG), is more accessible than either MRI or PET as a tool for studies on autism, but it too has disadvantages. For example, the data it produces can be distorted when electric signals travel through brain and skull tissues of different densities.

Some autism researchers have in the last few years instead turned to magneto-encephalography (MEG), essentially the magnetic equivalent of EEG.

Unlike with an EEG, MEG data are not distorted by varying densities of brain tissue ― and they don’t involve the laborious application of scores of electrodes to a child’s head. What’s more, MEG collects data at split-second intervals, allowing the study of brain processes virtually in real time.

MEG relies on a decades-old invention that is now being used to study the hearing problems that often accompany autism. Called a bio-magnetometer, the machine is safe, noninvasive and silent ― and looks much like an outsized version of the helmet-like hair drier once used in professional salons.

“Children love it,” says Tal Kenet, an instructor at Harvard Medical School who is using MEG to study sensory processing in autism. To children, the contraption looks like something that belongs in a spaceship, Kenet says. “They love to have their picture taken in it.” 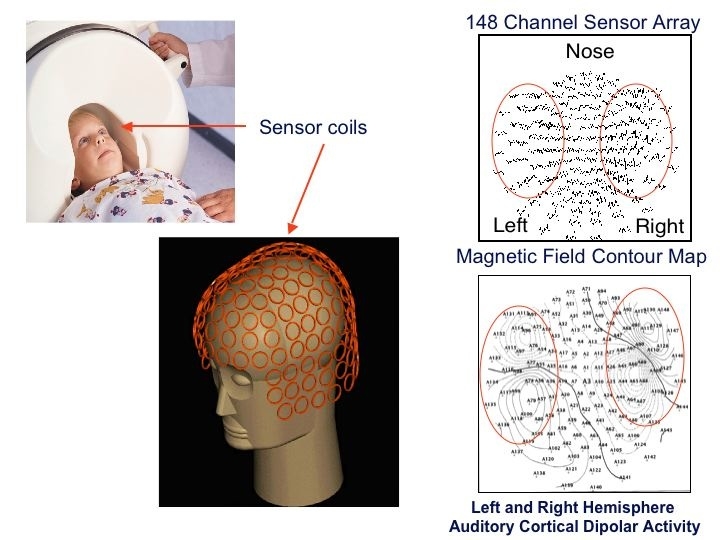 With their heads a few millimeters from the edges of the liquid helium-filled ‘helmet’, the kids are exposed to stimuli ― a series of sounds or words for example. When they react, the neurons that respond become electrically active, generating a magnetic field.

Hundreds of tiny detectors, called SQUIDS or superconducting quantum interference devices, in the machine pick up the magnetic fields. Using these recordings, mathematical models can estimate the brain region from which the signals were generated, producing a high-resolution map of the magnetic fields in space and time. Researchers then superimpose this on an anatomical brain map generated by an MRI.

“We can basically replay movies of brain functional activity over the course of time, frame by frame, millisecond by millisecond, as the activity moves around to different parts of the brain,” says Timothy Roberts, vice chair of radiology research at the Children’s Hospital of Philadelphia. Roberts is the lead investigator on a $1.25 million, five-year study funded by the National Institutes of Health that is using MEG to identify the electrical ‘signatures’ that underlie language impairment in autism.

MEG’s use in autistic children began in 1999 after Eric London, who co-founded the National Alliance for Autism Research, sought out Roberts and Nicole Gage, then a graduate student in Roberts’ lab. As a psychiatrist and the father of a child with autism, London was well aware of both the hearing problems in autistic kids and the difficulties of studying those problems, and he suggested that Roberts try MEG as a research tool.

Working with $60,000 in seed money from the alliance, Gage and Roberts produced two 2003 papers that were the first to use MEG to assess auditory and language function in children with autism1,2. The alliance has since merged with Autism Speaks, another advocacy group.

MEG collects records data at intervals of less than a millisecond, far beyond the resolution capacity of a functional MRI, which can only differentiate between events occurring more than five or six seconds apart in time. Most people speak at about four syllables per second, so fMRIs are not nearly quick enough for time-sensitive studies on hearing and speech. As Gage puts it, “The question you ask with fMRI is ‘Where?’, not ‘When?'” 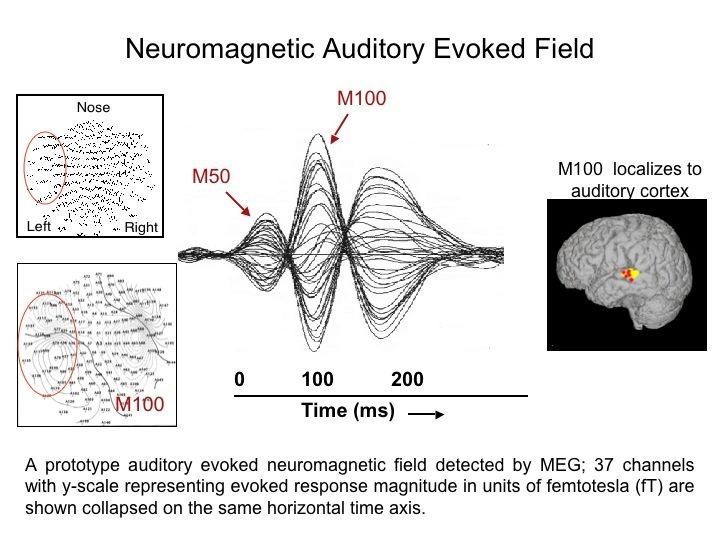 MEG records data at intervals of less than a millisecond, far beyond the resolution of an fMRI.

Quick capture: MEG records data at intervals of less than a millisecond, far beyond the resolution of an fMRI.

Another key advantage of MEG is that it doesn’t require the children to actively participate in a task as fMRIs do. In trials that require autistic children to perform tasks, such as separating pictures of vegetables from those of animals, it’s impossible to know whether the children do poorly because of inattention or inability. But MEG picks up passive responses to stimuli, so any deficits it records suggest problems with brain function, rather than just an inability to focus on a task.

For example, in one study Roberts ran a stream of repeating “ahh” syllables past kids, then slipped in an “ooh” sound. Using MEG to study the responses to the sounds, he found that children with autism recognized the change about 50 milliseconds later than unaffected children.

“Fifty milliseconds is a long time in the life of a syllable,” Roberts says. “One hypothesis is that, if it takes you an extra 50 milliseconds to even figure out that the syllable has changed, it’s like your brain can never really catch up in the auditory stream.”

There are an estimated 30 MEG machines in the United States and roughly 70 in other countries. Each machine costs up to $3 million. In 2002, new Medicare rules made it easier for clinicians to get reimbursed for MEG’s use in mapping areas of the brain to preserve before surgery for epilepsy or cancer ― and made the machines more affordable for research centers.

In time, researchers may be able to use MEG to unravel exactly how signal processing has gone awry in autism, and perhaps design interventions that “clean up” the signals, says Gage, now a cognitive neuroscientist at the University of California, Irvine.

Despite its advantages, MEG is not without its limits. Its accuracy at localizing the sources of magnetic waves varies with the quality of the mathematical model, the strength of the brain activity being monitored and the source of the activity.

Neurons in areas of the brain that mediate sound, sight and touch produce magnetic fields that exit the skull, and can then be detected by MEG. But the technique can’t detect signals from deep brain structures, such as the thalamus, or from cells on the brain surface, whose magnetic fields don’t exit the skull. These limitations can be solved to some extent by combining MEG with EEG3.

From a practical standpoint, MEG is still an easier alternative than MRI. Although children have to sit still even with MEG, it’s easier to keep them entertained while they are tested. “We have them watch videos,” says Gage, adding that Toy Story 2 has the best track record. Still, she says, “it’s trench warfare, I won’t lie to you.”