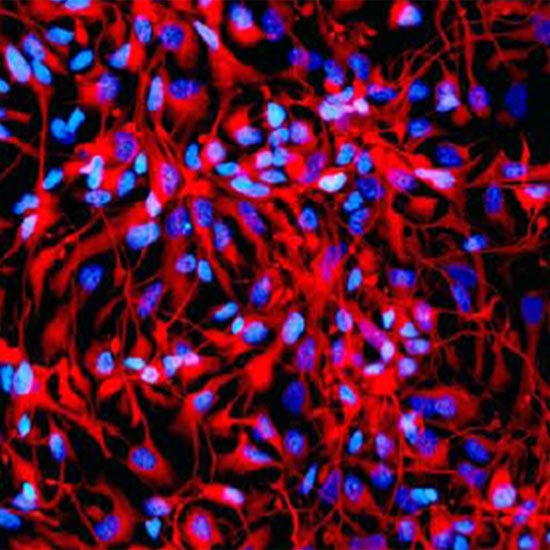 Selectively disrupting an autism-related gene in cultured human neurons causes a dramatic imbalance of excitation and inhibition in cell signaling, according to unpublished results presented today at the Society for Neuroscience meeting in Chicago.

Rett syndrome is a rare neurodevelopmental disorder caused by mutations in MeCP2, which is known to be a master regulator of many other genes. The syndrome, which predominantly affects girls, is characterized by distinctive hand movements and autism-like features, including social deficits and repetitive behavior.

Deleting MeCP2 triggers features of the disorder in a mouse model, but scientists are still trying to unravel the mutations’ molecular and cellular consequences.

Yi Eve Sun and her colleagues at the University of California, Los Angeles, infected neural progenitor cells with a virus containing a molecule that lowers MeCP2 expression. They then let the cells differentiate into neurons.

“When the electrophysiologist first recorded these cells, he was shocked because he saw a very dramatic phenotype,” says Sun, an associate professor of psychiatry and biobehavioral sciences.

The imbalance of excitation and inhibition in the human brain may be more robust than that seen in the mouse brain, because Rett symptoms are much more dramatic in humans, Sun notes.

MeCP2 deficiency also increases and decreases the expression of many genes, the group found. Researchers are working to determine where in the genome MeCP2 binds to alter expression.

Surprisingly, about half of the time, the protein binds to spaces in between genes, according to unpublished results. In that case, Sun says, it will be difficult to figure out exactly which genes MeCP2 regulates.