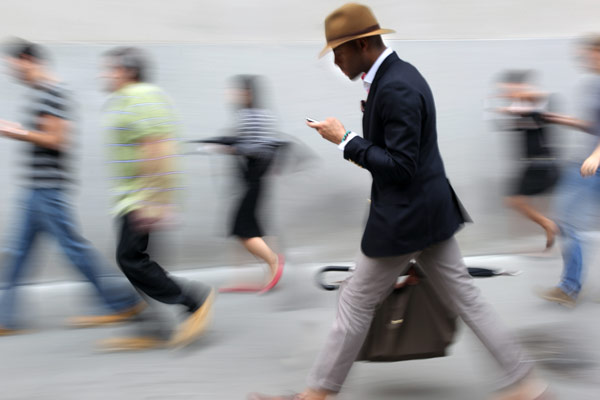 blurAZ/Shutterstock.com Visual prowess: People with autism tend to be better than their typically developing peers at tracking high-contrast moving images.

A mathematical model of the brain’s circuits shows how neurons stuck in overdrive could produce symptoms of autism. The model, described 28 July in the Proceedings of the National Academy of Sciences, may reveal how autism-linked behaviors arise from underlying biology1.

It could also help identify subgroups of autism based on neuronal behavior — something that would be especially useful for cases in which the disorder’s genetic cause is unknown.

Much of the research in autism focuses on either underlying biology or behavior, with little attention given to what is happening in between, says lead researcher Ari Rosenberg, assistant professor of neuroscience at the University of Wisconsin-Madison.

“[Brain circuits] act as a bridge between the physiology of autism and its behavioral consequences,” Rosenberg says. “We wanted to understand what is underlying autism’s complexity, and what is giving rise to differences across people.”

Working with Dora Angelaki at Baylor College of Medicine in Houston, Rosenberg helped create a mathematical model of the network of neurons in the primary visual cortex. This region is part of the brain’s outer rind and processes information from the eyes.

By changing the way neurons function in this model, the researchers were able to produce a specific visual performance associated with autism. This suggests that the model can be used to accurately predict autism symptoms that arise from anomalies in that part of the brain, the researchers say.

“Last year alone, there were just under 4,000 publications about autism,” Rosenberg says. “Our model provides a way to interpret this fast-growing body of studies and to make testable predictions about the neural basis of the disorder.”

This proof-of-concept approach could be applied to other sensory systems as well — a ripe area of research due to the prevalence of sensory disruptions in people with autism. The work also lends support to a popular explanation of autism that suggests the excitatory and inhibitory signals in the brain are out of balance, Rosenberg says.

The findings fit with current theories on autism and sensory perception, says David Burr, professor of physiological psychology at the University of Florence in Italy. “The work is very well done, with clear data to back their case,” Burr says.

At the heart of the new model is a process called divisive normalization, through which the brain properly calibrates the balance between the excitation and inhibition of neurons. This so-called excitatory-inhibitory (E/I) balance affects functions ranging from low-level sensory processing to the high-level computations necessary for decision-making.

“Our model provides a way to interpret the fast-growing body of autism studies.”

One popular theory of autism proposes that individuals with autism have an E/I imbalance, which causes the hypersensitivity — or sensory overload — that is so often associated with the condition. Rosenberg and his colleagues used their model to examine whether an E/I imbalance could alter neural function in a way that predicts autism behaviors.

To build their paradigm, they first reviewed more than 200 studies on E/I imbalance and divisive normalization as well as research that compares cognitive, motor and sensory behavior of people with and without autism.

They decided to model the visual cortex because of the extensive volume of information that researchers have collected about how this region works.

The visual cortex is like a tiled floor, with each neuron responding to visual stimuli in its own small area. Collectively, the neurons encode all of a visual scene. Each neuron also has a preferred orientation: Some neurons respond best to horizontal edges, others to vertical edges, and still others to oblique ones.

Rosenberg’s model is a mathematical representation of this array, with each model neuron corresponding to a specific location in visual space, and a preferred orientation.

“We asked if we can alter parameters of the model in a way that’s consistent with the physiology of autism,” says Rosenberg, “and whether those changes would then produce effects that reproduce what we found in the literature.”

Rosenberg and his colleagues tested their model by trying to replicate the results from a 2013 study. In that study, researchers asked 46 children to judge whether visual patterns of different sizes and degrees of contrast were moving to the left or the right2.

As the size of a high-contrast image — say, a black and white pattern — increases, performance in most people typically decreases. The study found that the performance of children with autism shows this same pattern. However, the children with autism performed better than controls at this task and in tracking all sizes of moving high-contrast images.

Rosenberg and his colleagues set out to see whether their new model can predict this visual behavior — that is, whether high-contrast stimuli would activate the visual cortex more in people with autism than in unaffected individuals. The model did predict the same visual behavior that the 2013 study found in children.

The researchers similarly tested results from two other studies of visual behaviors, including one on the incidence of tunnel vision in people with autism. Decreasing the strength of inhibition in the model caused the corresponding level of neuronal activity to change in ways that predict the reported behavioral findings.

“We were able to change a single parameter in the divisive normalization signal and recapitulate very different behavioral studies conducted by different labs,” Rosenberg says.

The approach offers a refreshing perspective on several perceptual consequences of autism, says Takao Hensch, professor of molecular and cellular biology and neurology at Harvard University. “The E/I view is powerful because it can target brain function by modality — vision, touch and hearing, for example — rather than targeting individual molecules,” he says.

The researchers plan to test the model’s behavioral predictions in people with autism. They also aim to use their techniques to model a number of other sensory systems, including hearing and touch.

Eventually, they say, they anticipate expanding the model to represent the high-level computations performed by the cerebral cortex, such as face processing and decision-making. They believe that the more complexity they can build into the model, the more autism symptoms they will be able to account for and explain — and the greater the likelihood that their findings will provide insights into treatment.