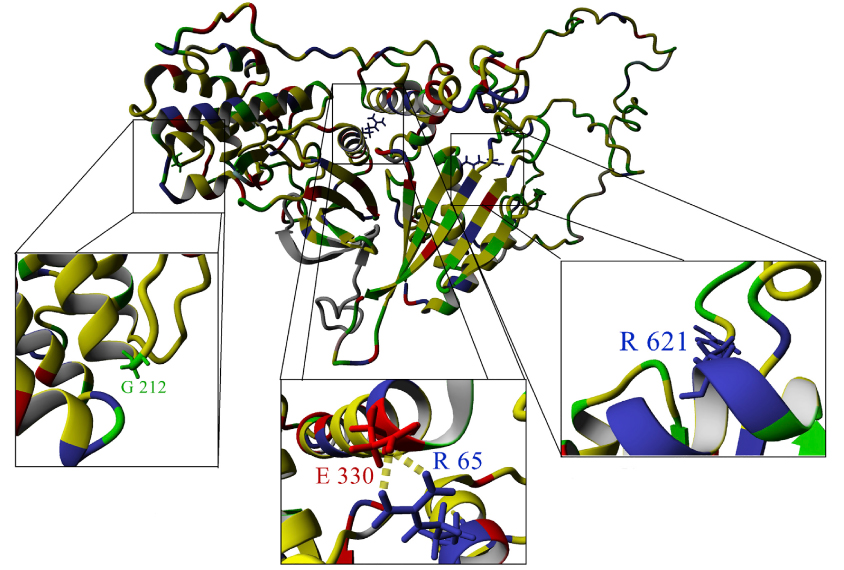 Hot spots: Mutations in a gene called BRSK2 can disable the protein it encodes by affecting any of several of its parts.

A social website called GeneMatcher has helped researchers identify a new gene for intellectual disability, developmental delay and, possibly, autism. Of the nine children they found with a mutation in the gene, BRSK2, seven have an autism diagnosis1.

BRSK2 encodes an enzyme that helps neurons grow projections called axons. The new work is the first to link the gene to neurodevelopmental conditions.

The researchers spotted BRSK2 mutations after sequencing the genomes of hundreds of individuals with unexplained developmental delay or intellectual disability. They bolstered their findings using GeneMatcher, which connects scientists studying the same genes.

The discovery gives families “a more precise diagnosis of the challenges their children are struggling with,” says lead researcher Greg Cooper, a geneticist at the HudsonAlpha Institute for Biotechnology in Huntsville, Alabama.

The fact that some of the children also have autism is not surprising: Genes implicated in autism often overlap with those for intellectual disability and other brain conditions.

“Is it an autism gene? We don’t have the answer to that question yet,” says Heather Mefford, associate professor of clinical genetics at the University of Washington in Seattle, who was not involved in the study. “This discovery may give some insight.”

Cooper’s team sought to identify any genetic cause for the problems in 371 children.

They first sequenced the DNA of 977 people in 284 families involved in a project called the Clinical Sequencing Exploratory Research Consortium. Most of the families include a child with either developmental delay or intellectual disability, and both parents. Trios of this sort help scientists discover variants that occur spontaneously — the variants show up in the child but not in the parents.

The team found mutations that disrupt BRSK2 in four children. The finding intrigued Cooper because he thought it might be a new genetic cause of developmental problems — but four was too few to convince him of that.

So Cooper turned to GeneMatcher. He posted a call on the site for any researchers who, like him, had findings related to BRSK2. He received responses from four research groups. Together, their teams had sequenced the genomes of 3,429 individuals with either developmental delay or intellectual disability and identified five additional people with BRSK2 mutations.

“That gave us enough families to go from something compelling but uncertain to being sure these variants are pathogenic,” Cooper says. The results appeared in April in The American Journal of Human Genetics.

The findings jibe with existing knowledge about BRSK2 from research in mice and worms2,3,4. The gene is involved in a signaling pathway implicated in tuberous sclerosis complex, a rare condition that causes benign tumors, often accompanied by epilepsy and intellectual disability. About half of people with tuberous sclerosis also have autism. BRSK2 also interacts with PTEN, a gene associated with several developmental conditions, including autism.

A case count of 9 out of 3,429 people is high for a rare condition, Cooper says — enough to make him question why BRSK2 had not been linked to neurodevelopmental conditions before.

The answer may lie in the fact that whole-genome sequencing was not feasible on a large scale even just a few years ago.

When Cooper’s project began in 2013, the team was sequencing only exomes, the 3 percent of the genome that codes for proteins, because sequencing the whole genome was too expensive. Exome sequencing tends to miss the BRSK2 region, Cooper says, although he isn’t sure why.

“The take-home for me is that every family with a child with developmental delay or autism essentially deserves full-genome sequencing,” says Evan Eichler, professor of genome sciences at the University of Washington, who was not involved in the study. “Exomes are the quick and dirty way, but they are not the comprehensive way.”

Pinpointing the mutations underlying a brain condition may eventually lead to therapies. But some benefits are more immediate. Some of the families with a child carrying a BRSK2 mutation have already connected in person and through social media. “These families can now talk to another family that is going through a similar experience,” Cooper says. “Having a tangible, concrete diagnosis like this is a real benefit.”