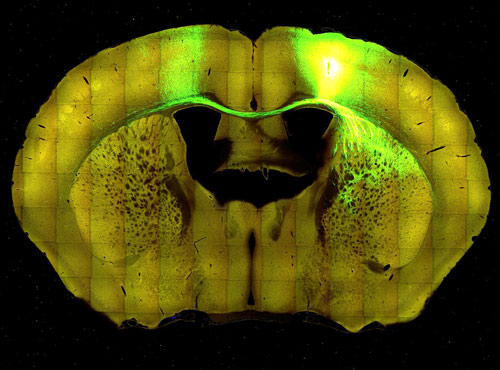 Allen Institute for Brain Science Lights on: Researchers plan to use optogenetics and other techniques to identify the function of individual neurons in the cerebral cortex and visualize how they are wired together.

Lights on: Researchers plan to use optogenetics and other techniques to identify the function of individual neurons in the cerebral cortex and visualize how they are wired together.

A ten-year initiative announced last month by the Allen Institute for Brain Science aims to catalog the development, structure and function of neural circuits in the brain at an unprecedented level of detail.

The nonprofit research institute, based in Seattle, has received a $300-million gift from philanthropist Paul Allen, for whom the institute is named, to fund the first four years of the work. Allen, who co-founded Microsoft, has previously donated $200 million to the institute.

Researchers will catalog millions of individual cells in the mouse brain, and characterize the function and wiring of local circuits. Using induced pluripotent stem (iPS) cells from humans — adult cells that have been ‘reprogrammed’ and can be coaxed to develop into any cell type — they will also explore how the various cell types that make up neural circuits differentiate and become wired together.

“All these are very time-consuming and also quite expensive projects, and I think beyond the scope of a smaller laboratory,” says Zoltán Molnár, professor of developmental neurobiology at Oxford University in the U.K., who is not involved with the project. “So you need large institutes that are willing to do this systematically.”

As it has with the Allen Brain Atlas, which charts gene expression in the brains of humans, mice and non-human primates, the institute plans to make data from the new projects freely available online.

Molnár predicts that describing the brain in such great detail will be key to understanding diseases like autism and schizophrenia.

To carry out the ambitious effort, the Allen Institute plans to expand its campus and more than double its staff over the next four years, to more than 350 employees.

One new hire is Ricardo Dolmetsch, assistant professor of neurobiology at Stanford University in Palo Alto, California, who will join the institute this summer. Dolmetsch will lead an effort to generate iPS cells and then neuronal cell lines from approximately 1,000 people, including some with autism or autism-related genetic disorders. The cells would be made available to the larger neuroscience community and to Allen Institute researchers.

In the past, Dolmetsch has used iPS cells to study abnormalities in neurons from people with Timothy syndrome, an autism-related disorder. That work highlighted the potential importance in autism of catecholamines, chemical messengers that are produced in excess by neurons in individuals with Timothy syndrome. Other researchers have made iPS-derived neurons from people with autism, fragile X syndrome and Rett syndrome.

“It’s still a difficult and expensive technology,” Dolmetsch says of iPS cell research.  “So the hope is that if you can provide these cultures to a lot of people in a really standardized, well-validated way, it will be a force multiplier for the field.”

His group will also develop a set of techniques for systematically picking out and studying specific types of iPS-derived neurons.

“When you make neurons in a dish, you end up with a very large and diverse population of cells,” says Dolmetsch, including interneurons, pyramidal cells and many others. “And so you need ways of being able to study only one or just a particular type of cell.”

Using these new techniques, institute researchers plan to, for example, study the similarities and differences among the neurons of different people with autism, to see whether different genetic backgrounds result in common cellular abnormalities.

Another part of the initiative aims to produce “an anatomical and physiological atlas of information processing in the mouse visual system,” says Clay Reid, professor of neurobiology at Harvard Medical School, who will also join the Allen Institute in the next few months to lead some of this research1.

The team will begin by cataloging all of the cells in ten different areas of the cerebral cortex that a mouse uses to process and interpret what it sees. They will trace the interconnections of individual cells in the mouse visual cortex, and try to determine their function.

Reid and his colleagues have conducted a similar project involving an area of the mouse visual cortex containing about 1,500 cells2. But the Allen Institute project will be carried out on a much larger scale, surveying hundreds of thousands of neurons.

“In the past several years, it’s become possible to make the kind of measurements that were unimaginable a few years ago,” Reid says. “We can ask what a certain class of neurons in a certain cortical area does in the context of a behavior.”

For example, a method known as optogenetics enables scientists to visualize individual neurons by lighting up cells when they are active, or even to tinker with the brain by controlling the activity of individual nerve cells with light.

“You can watch tens of neurons simultaneously and chart their activity as it relates to the mouse both perceiving the visual stimuli and making the decisions to navigate left or right” through a maze, Reid says.

Combining these studies with techniques such as three-dimensional electron microscopy, which can show every axon, dendrite and even synapse in a given area of the brain, yields a wiring diagram that shows how cells with specific functions link together. This new area of neuroscience has been dubbed ‘functional connectomics.’

An informatics team plans to use the huge volume of data that the researchers generate to model how the mouse uses its cortex to see.

The institute has chosen to focus initially on the mouse visual cortex because a wide variety of genetic engineering tools are available for use in this species, and because behavioral assays are also well established.

Molnár says focusing one organization’s efforts on one sensory system in one species is a savvy idea. “I like this because it’s a focused approach and they have the expertise” to carry it out, he says.

Reid adds that the mouse’s relatively poor eyesight is “almost a good thing” in this case, because it translates into fewer neurons. “And that allows us to really do an encyclopedic overview.” The mouse visual cortex is estimated to have one to two million neurons, compared with five billion in humans.

The project’s findings will likely have relevance far beyond the mouse visual cortex, however, because of the structural similarities between the visual system and other parts of the cortex and across different species.

“Even if things aren’t exactly the same, it’s going to allow other scientists to come up with new hypotheses that they wouldn’t have come up with before,” says Michael Huerta, director of the Human Connectome Project, an effort funded by the National Institutes of Health to map the long-range communication pathways in the brain.

Similar techniques could eventually be used to assess mouse models of disorders such as autism, or to study the cortex in other species, including humans.

One risk, though, is that techniques that are cutting-edge now will be behind the times by the end of the effort. “If you have this large-scale project, it’s kind of like a big ship,” Molnár says — it’s hard to change directions once it gets started.

But if it succeeds — and scientists can use the data to build a more accurate model of how the cortex works — the results could transform neuroscience, argues Henry Markram, professor of neuroscience at the École Polytechnique Fédérale in Lausanne, Switzerland.

“The main reason we don’t understand the brain today is because data and knowledge is far too fragmented to allow anyone to see the big picture,” says Markram, who is head of the Blue Brain Project, a European effort to model the workings of the entire human brain. And one way or another, putting together that big picture requires big science.