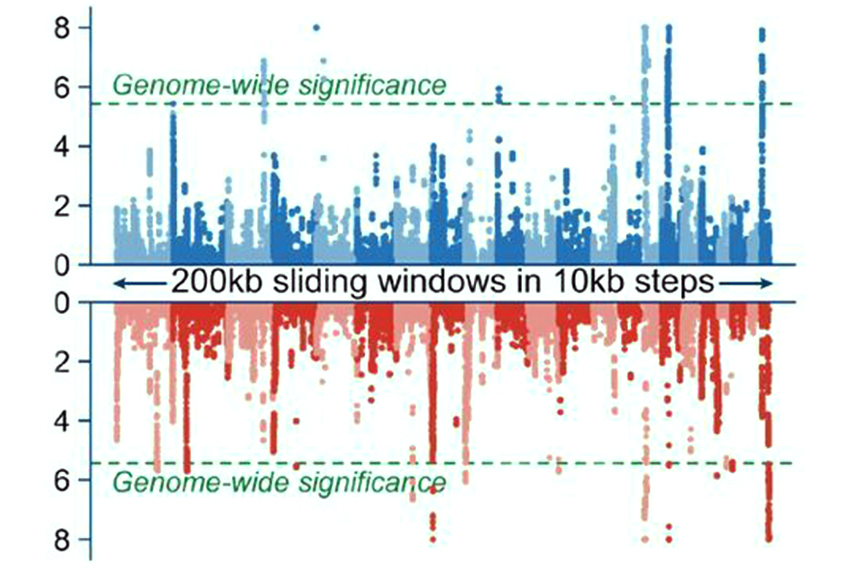 Researchers have rated more than 17,000 genes on their sensitivity to mutations that delete or duplicate them, based on an unpublished analysis of genetic data from more than 750,000 people. The analysis also identified 49 areas of the genome where mutations are associated with neurodevelopmental conditions, including autism.

Mutations known as copy number variations (CNVs) occur when a stretch of DNA repeats in or is missing from a chromosome. CNVs are one of the most common genetic causes of autism, but because they can encompass hundreds of thousands of base pairs, it’s often unclear which genes contribute most to a person’s traits.

The scores from the new study indicate how strongly a deletion or duplication would affect the function of individual genes and how severe the neurodevelopmental outcome might be, which could be useful for both researchers and clinicians, says study investigator Ryan Collins, a graduate student in Michael Talkowski’s lab at Harvard University.

Other researchers have already expressed an interest in incorporating these scores into their own analyses to help interpret genetic results, Collins says.

“These scores are actually useful for interpreting genetic variation in the context of medical genetics and even, looking forward, for clinical diagnostics,” he says.

Collins and his colleagues compiled genetic data from 13 sources covering 30 neurodevelopmental and neuropsychiatric traits, including autism traits, schizophrenia symptoms and seizures. The sample included 753,994 people, 293,235 of whom have at least one of the traits.

The team found 49 segments of the genome, each at least 200,000 base pairs long, in which CNVs are associated with neurodevelopmental conditions. Some segments contained genes newly associated with such conditions, including CBLN2, which encodes for a protein expressed in synapses.

They also identified new functions for some genes previously known to be involved in neurodevelopment. A single base pair mutation in the gene SMARCA2, for example, is known to cause a form of intellectual disability called Nicolaides-Baraitser syndrome, but the new work revealed that deletions in the gene are also associated with other neurodevelopmental conditions.

“Looking at the genetics from different perspectives can lead you to the same genes, but what they tell you about those genes is more important than just considering any one type of genetic variant or the other,” Collins says.

The researchers used machine learning to create sensitivity scores for 17,263 of the roughly 20,000 genes in the human genome. Nearly 3,300 are sensitive to deletions and duplications that can lead to a neurodevelopmental condition.

The team is continuing to amass new data and has preliminary results from an analysis of more than 1 million people, Collins says.