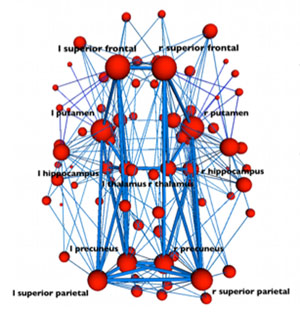 Using new approaches to analyze brain imaging data, researchers have developed a way to map structural networks that are central to the flow and integration of information across the whole brain.

The way these networks are organized may reveal critical information hubs within the networks, as well as their overall efficiency — how quickly information flows from one area of the brain to another — two factors that may play a role in neurological and psychiatric diseases.

The researchers plan to apply the approach to brain imaging data from children with autism and other neurodevelopmental disorders.

This gestalt approach is made possible by rapidly expanding computing power and analytical tools borrowed from the maturing field of network science, first developed in the physical and social sciences to understand the relationships between different entities, such as people and organizations.

“We are experiencing a true paradigm shift in cognitive neuroscience in thinking about the brain in network terms,” says Bradley Schlaggar, associate professor of developmental neurobiology at the Washington University School of Medicine in St. Louis. “Neuroscientists are coopting methods developed elsewhere, and now, because of surging interest [in network analysis], are beginning to contribute to the push forward.”

Research suggests that abnormal connectivity may play an important role in autism and other disorders, by altering the transmission of information within the brain.

“We believe that many, perhaps all, neurodevelopmental disorders are related to abnormal wiring,” says Martijn van den Heuvel, assistant professor of psychiatry at the University Medical Centre Utrecht in the Netherlands, who is planning the autism study. “It could be over-connectivity or under-connectivity, or a different topology of connections.” Van den Heuvel and collaborator Olaf Sporns, professor of psychological and brain sciences at Indiana University in Bloomington, are among the first to apply these analysis techniques to brain imaging.

To create the network, researchers first map out the structural connections in the brain using data from diffusion tensor imaging, an indirect measure of the brain’s white matter. Similar maps can be constructed using functional magnetic resonance imaging, which detects brain regions that are synchronously active and therefore likely to be part of the same circuit.

Researchers then examine the network’s higher-order characteristics, such as the way its constituent parts are arranged, using mathematical tools — most notably graph theory, which analyzes the relationship between different points or objects. In this case, those objects are nodes of connectivity in the brain.

The end result is a comprehensive map of the brain’s neuronal connections, which the researchers can then pare down to examinethe most highly interlinked networks.

Traditional brain imaging studies have focused on specific circuits or brain regions involved in specific tasks, but van den Heuvel’s work is part of a growing trend to analyze the function of the brain as a whole.

“Brain function, and in the case of autism and schizophrenia, brain dysfunction, does not emerge from single regions or connections,” says van den Heuvel. “It emerges from continual brain communication, which is why this is such a powerful technique to look at neurodevelopmental disorders.”

In 2010, van den Heuvel used his approach to show that people with schizophrenia may not be able to integrate information as efficiently across brain regions as controls do1.

A subsequent study of 21 healthy adults, published in the Journal of Neuroscience last November2, built on this network analysis to show that highly connected nodes in the brain are also preferentially connected to one another. The researchers suggest that this ‘core’ network integrates higher-order information from all other regions of the brain.

Van den Heuvel likens this network to a “G8 of the brain.”

“The world leaders of the biggest countries have different backgrounds, but they come together to discuss topics that concern the well-being of the entire world,” he says. “Perhaps [this network] has a similar function.”

Studying the brain’s organization in this way could also reveal how its connections change over time, during childhood and in neurodevelopmental disorders, he says.

“We know the brain is not static, especially in developing from child to adult,” he says. “Does this involve changes in the topology of the network?”

Studies suggest that children with autism may have a number of subtle abnormalities in the brain’s connectivity, including weaker connections in some areas and an excess of short-range connections, bolstering the so-called connectivity theory of autism.

Van den Heuvel and his colleagues are planning to use their network approach to look for different types of connectivity deficits in children with autism.

For example, it might reveal excessive connections among specific sub-networks, or perhaps less efficient networks overall.

“From the perspective of a clinician, I’m very excited about the notion of being able to extract information from brain images that on the surface seem to be typical, but when analyzed appropriately, may reveal the basis of autism, attention deficit and hyperactivity disorder, and other disorders,” says Schlaggar, who studies connectivity patterns in children with developmental disorders, but is not involved with this work.

“The topology of the brain may provide a clearer phenotype and form a bridge between genetics and brain imaging,” says van den Heuvel.

Despite its promise, network analysis of brain imaging is in the early days. Researchers are still experimenting with a number of analysis techniques and exploring both their advantages and limitations.

“It remains to be seen which network approach is going to be most useful, whether it’s from structural imaging, functional imaging or a combination,” says Schlaggar.

Indeed, findings published in the past few months show that connectivity analysis, particularly among children and those with certain disorders, requires particular care.

For example, the finding that children with autism have an excess of short-range connections may be the result of experimental artifacts.

What’s more, the imaging methods used to create the maps are indirect measures of connectivity, and it’s still not clear what exactly the networks identified in these studies correspond to in the physical brain.

“The question of what the neuronal fiber pathways of the human brain are at a large scale is not yet well-understood, either at the scientific level or at the practical level,” says Van Wedeen, associate professor of radiology at Harvard Medical School, who was not involved in the current work. “[The network analysis] approach is an exciting and promising bid for doing that, but with caveats.”