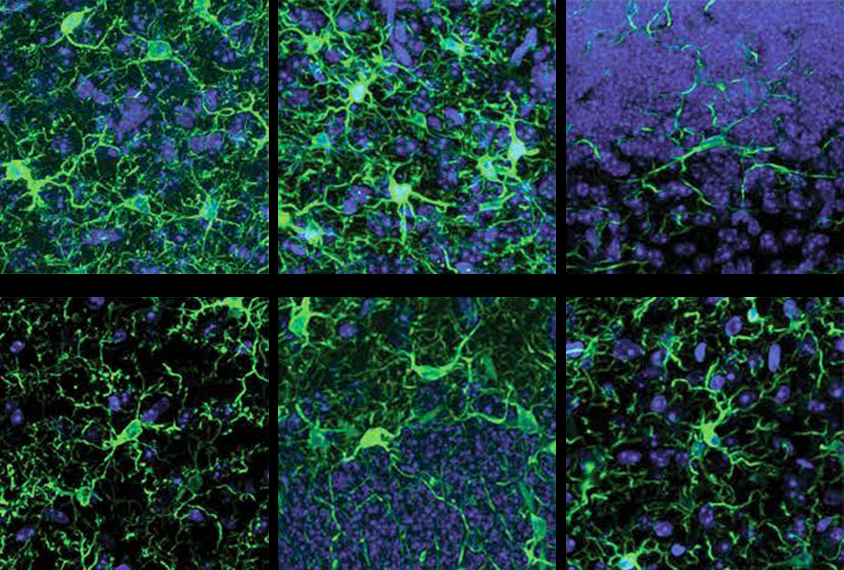 Branching out: A new method picks up on microglia features that change throughout development in a brain-region-specific manner.

Microglia have distinct morphologies depending on where they reside in the mouse brain, according to a novel approach that reveals nuances about the cells’ shape. That form also changes with development and varies by sex, the researchers show in data that could aid in understanding the role of microglia in conditions such as autism.

Microglia are immune cells that support healthy development in the brain. Considered the brain’s gardeners or housekeepers, they continuously survey their environment, ready to activate when their services are needed to prune synapses or clean up cell debris.

Microglial cell function goes awry in people with autism, according to one theory about the condition. Microglia in autistic people’s brains tend to have dysregulated genes, and autism model mice have a disproportionate number of microglia in an activated state. But researchers do not yet have a handle on how microglia morphology is linked to function or how it changes during development, so it has been difficult to assess exactly what’s atypical in autistic people.

One challenge is figuring out how to track the cells’ changes in the first place, says Sandra Siegert, assistant professor of life sciences at the Institute of Science and Technology Austria in Klosterneuburg. Although it’s often possible to distinguish between activated and non-activated microglia — the former tend to be round with short appendages, whereas non-activated cells usually have long, thin arms that branch off in many directions — many cells exist in an intermediate state.

As a result, “we don’t know which feature is the most important feature for characterizing the microglia’s shape,” Siegert says. So she and her colleagues came up with a way to mathematically simplify a microglial cell’s 3D shape while retaining as much information as possible, which they used to analyze more than 40,000 individual cells from seven brain regions in male and female mice at various stages of development.

The approach could “shine a light on which circuits might be involved” in neurodevelopmental conditions such as autism, says Lior Brimberg, assistant professor of neuroimmunology at the Feinstein Institutes for Medical Research in Manhasset, New York, who was not involved in the work.

Siegert says she and her colleagues wanted to assess how microglia change shape in response to exposure to the drug ketamine, which is used to anesthetize lab animals. Repeated ketamine exposure, the team found in a previous study, enables microglia to remove a structure called the perineuronal net from interneurons, increasing the neurons’ synaptic plasticity. But when the team used standard methods to evaluate changes in the microglial cells’ shape that could explain the shift in function, they came up with nothing.

They decided instead to track the cells’ morphology using methods from the mathematical field of topology. They developed an algorithm that tracks the length of a cell’s branches, starting with the ends farthest from the cell body. At each branch point, the software determines the longest and shortest branch. It records the length of the shorter branch and then continues to follow the length of the longer arm. The resulting readout looks like a horizontal barcode, with a stack of staggered lines that represent the length of each branch and its relationship to the others on the cell.

The team then converted each barcode into an image and processed the pool of images so as to capture the most informative dimensions. Microglia from the same brain region have similar morphology, plots of the results from each cell revealed. Cells from the primary somatosensory cortex mapped close to each other, for example, whereas cells from the cochlear nucleus and cerebellum formed their own groups — suggesting the approach captures meaningful regional differences in microglial shape. The findings appeared September in Nature Neuroscience. 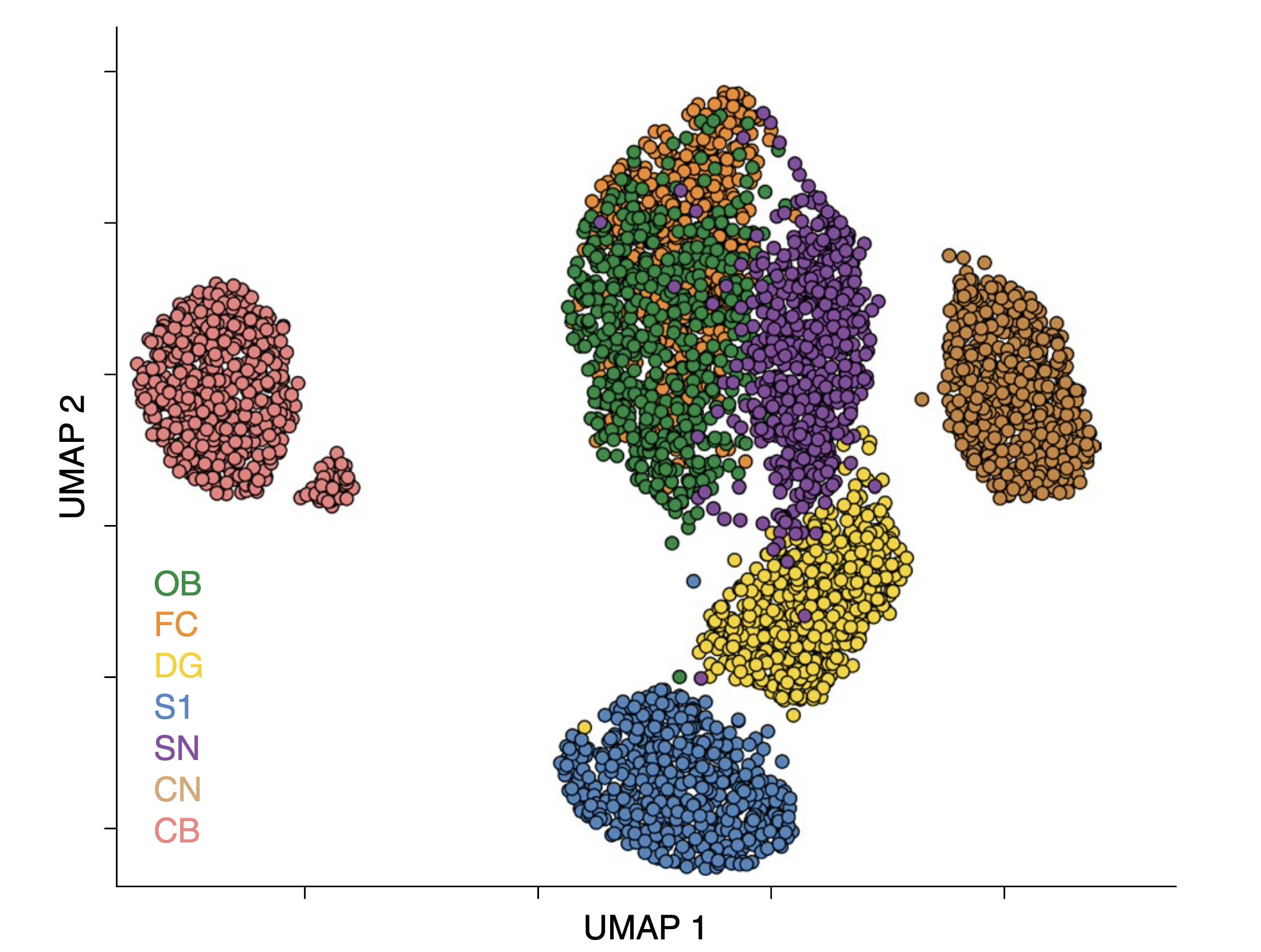 Similar shapes: Microglia from the same brain region (represented by color) cluster together when analyzed using the new method, suggesting that they have similar morphology.

Microglial morphology changes with development in a regionally specific way, according to an analysis of cells from 7-, 15- and 22-day-old mice, as well as from adult animals. Cells from adult female and male mice also formed their own distinct clusters for most brain regions, pointing to sex differences in microglia.

When Siegert and her colleagues applied this same approach to microglia repeatedly exposed to ketamine, they found that multiple exposures shifted the cells away from the mature, non-activated profile toward the activated profile seen in the brains of younger mice.

With the previous approach, “it’s not so massively obvious that there is something morphologically going on,” Siegert says. “But now with our strategy, it is possible to track down this kind of morphological change.”

Gaining a clear picture of how and when microglia change morphology in animal models of autism “will be a humongous advantage,” Brimberg says.

Single-cell RNA sequencing can differentiate between activated and non-activated microglia, but it’s not yet clear how the RNA-seq data correspond to subtle differences in the cells’ shapes, Brimberg notes. Moving forward, it would also be helpful to compare the RNA-sequencing data with the morphology data to see how they overlap, she adds.

The researchers plan to continue to investigate how microglia morphology predicts function — from pinpointing what changes after repeated ketamine exposure to tracking the cells’ shape in the brains of mice that model conditions such as Alzheimer’s disease, Siegert says.

“Morphology has been so important” for categorizing cells and comparing across conditions, she says. “So this is critical” to understand.