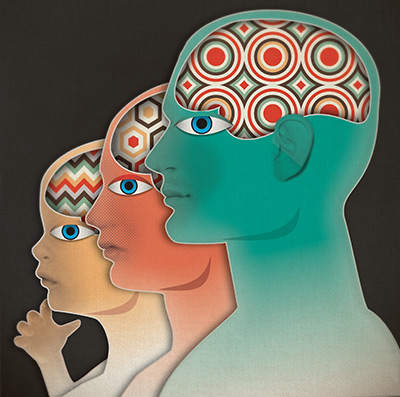 Maturing map: The new reference map is the first to show both when and where methyl marks are added to brain cell DNA.

Researchers have debuted the most comprehensive map to date showing how the suite of methyl tags on the DNA of brain cells changes across the genome over a lifetime1. The map, published 4 July in Science, suggests that shifting patterns of methylation may guide key periods of brain development.

The addition of methyl groups to DNA affects whether a gene is expressed, without changing the underlying genetic code. Collectively, methyl and other such chemical markers on DNA make up the epigenome.

“Just like you have disruption in the genome sequence, you can have it in the epigenome,” says co-lead investigator Joseph Ecker, director of the Genomic Analysis Laboratory at the Salk Institute for Biological Studies in San Diego, California. “I think this provides another avenue to explore how these patterns could potentially be disrupted.”

This is the first study to look across the entire genome for changes in methylation during important phases in brain development, rather than at specific points in the genome or in time.

The new reference map will allow researchers to investigate the ebb and flow of the typical brain’s epigenome and compare it with patterns in the brains of people with autism or other disorders.

The researchers based the map on postmortem samples, comparing mouse and human brain tissue at different ages ranging from fetal to adult. They fully sequenced the genomes from the brains’ cortical cells and then matched these sequences with the methylation marks for every nucleotide base in the sequence.

“This study was the most comprehensive map so far of the brain methylome that included not only a comparison of human versus mouse, but different developmental stages,” says Janine LaSalle, professor of medical microbiology and immunology at the University of California, Davis, who was not involved in the new study.

“It is extremely illuminating for seeing how methylomic marks change in different cell types and during development, providing important maps of not only where, but also when these marks occur and change,” LaSalle says.

There are several efforts underway to map the epigenome.

Some previous studies focused on patterns of methylation in hotspots within the genome that are prone to mutation, and that are linked to various disorders, including autism. In 2011, for example, Ecker published maps based on hotspots in embryonic stem cells2. Other large-scale mapping efforts have looked at epigenetic patterns across the whole genomes of stem cells.

Ecker’s lab is part of the Roadmap Epigenomics Mapping Consortium, funded by the National Institutes of Health. The project aims to build reference maps for epigenetic changes in a variety of cell types throughout development in mice and humans3.

In the new study, Ecker, a plant and molecular biologist, collaborated with Margarita Behrens to focus on the epigenome in mammalian brains.

“My main interest was trying to figure out the origins of schizophrenia, or any disorder in the brain that starts early, such as autism,” says Behrens, scientist at the Computational Biology Laboratory at Salk. “What we needed was the full genome. Nobody knew anything about what is happening there.”

The researchers began with an attempt to look at all the methylated DNA nucleotides across the genomes of both neurons and glia — brain cells that support and protect neurons and can influence development. Altogether, they analyzed postmortem brains from 11 people and 34 mice.

The enzyme that adds methyl groups to DNA travels along the length of an existing strand, traversing the four nucleotides: adenosine (A), cytosine (C), guanine (G) and thymine (T). The enzyme marks cytosine bases with various kinds of chemical modifications, such as methylation or 5-hydroxymethylation, both of which the team tracked in the study. The latter tag was discovered only in 2009, and is thought to regulate genes linked to autism.

Methylation of certain genes seems to play a role in forming new brain connections, and may trigger problems with learning and memory in autism and other disorders.

Most of the methylation in embryonic development consists of a C tagged right next to a G. Levels of this CG-methylation tend to remain constant during development, so it was a surprise for the team to learn that C tagged along with any of the other three bases — A, C or T — or so-called non-CG methylation, also seems to be important.

“Non-CG methylation turns out to have a dramatic effect during human neuron development,” says Ecker. “We found that it was a major player in epigenetic modification.”

There is a rapid increase in non-CG methylation from birth to 2 years in people and the equivalent age range, 2 to 4 weeks, in mice — which coincides with the rapid formation of connections between neurons — the study found. This pattern of methylation remains consistent in both people and mice across many genes, hinting at its importance.

The researchers also found an intriguing role for 5-hydroxymethylation. When it is laid down in a fetal neuron, it indicates where there will be demethylation later on in development.

“They show that this demethylation is a consequence,” says Aleksandar Milosavljevic, professor of molecular and human genetics at Baylor College of Medicine in Houston, Texas, who was not involved in the study. “In other words, 5-hydroxymethylation marks genes that are poised to become active.