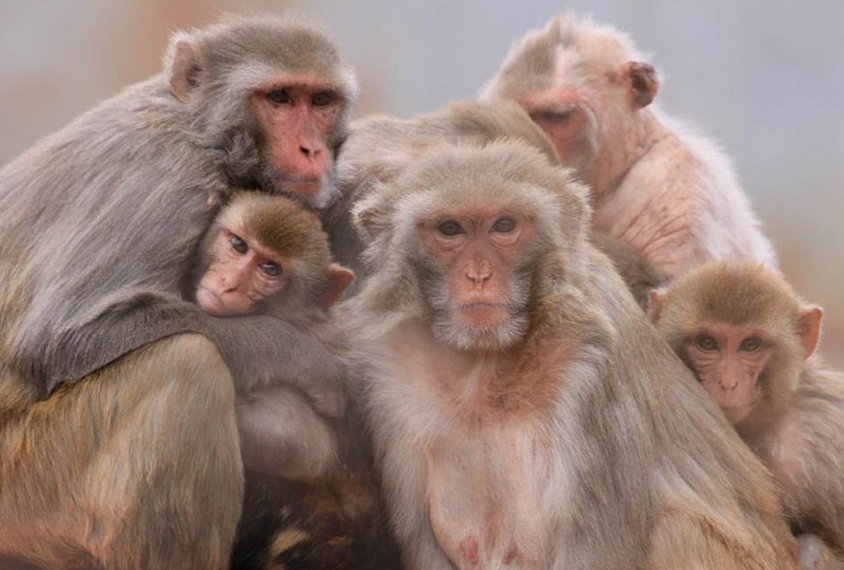 Some aspects of rhesus macaques’ social behavior are strongly shaped by genetics, with differences tied to variants in autism-linked genes, according to a new study. The findings may shed light on the mechanisms that underlie social difficulties in autistic people, the researchers say.

Like people, macaques are highly social and exhibit a range of social abilities, making them a good model animal for studying autism traits. Monkeys engineered to carry mutations in genes tied to autism, such as SHANK3 and MECP2, for example, show some autism-like behaviors. But genetically modifying primates has drawbacks: It’s expensive, time-consuming and may have unintended effects.

“If you go in and break a gene, you don’t know what else you’re breaking,” says Chris Gunter, senior adviser to the director of the U.S. National Human Genome Research Institute in Bethesda, Maryland.

In the new work, Gunter and her colleagues examined the extent to which naturally occurring genetic variation contributes to social behaviors in juvenile macaques. Preferences for solitary play or sitting alone, among other tendencies, are shaped by genetics, they found, with heritability estimates similar to those seen for autism in people. And four single-letter DNA changes in particular, out of variants across 143 autism-linked genes, were tied to specific behaviors. The findings were published in January in Autism Research.

The study is a “trailblazer,” says Katalin Gothard, professor of physiology and neuroscience at the University of Arizona in Tucson, who was not involved in the research. Rather than focusing on a single gene, as is often the case, the researchers examined a cohort of genes that may be implicated in social behavior. “I think that’s an incredibly important step,” she says.

Gunter and her colleagues used two different methods to gauge the social skills of 211 rhesus macaques, aged 12 to 18 months, housed at Yerkes National Primate Research Center Field Station in Lawrenceville, Georgia. The macaques lived in groups of up to 130 adult females with their offspring, along with 2 to 4 adult males.

In the first method, four trained observers watched the monkeys for 30 minutes on four different days, tallying the duration and frequency of particular behaviors, such as grooming, sitting alone or being in close proximity to another animal. In the second method, the observers rated the monkeys’ behaviors using a juvenile macaque version of the Social Responsiveness Scale (SRS), a questionnaire that measures a person’s social abilities and can be used to assess autism severity.

The researchers also collected blood samples from 208 of the macaques and sequenced their exomes, the protein-coding regions of the genome. The team then calculated the heritability — the extent to which genetic variations can explain the variability in behaviors or SRS items, either individually or grouped according to their similarities — among the macaques.

Overall, 20 individual or grouped components of social behavior are significantly heritable, the team reported. Individual behaviors with the highest heritability estimates — about 80 percent — include groom soliciting, in which a monkey signals to another that it would like to be groomed; sitting alone; and solitary play.

Children on the spectrum may similarly prefer sitting or playing alone, Gunter says, and further research may reveal whether atypical social behaviors in macaques and people share common genetic roots.

The researchers also searched the macaques’ exomes for single-letter changes in DNA and small insertions or deletions, known as ‘indels,’ focusing on variants within 143 genes associated with autism or known to shape the monkeys’ social behavior.

The team identified 193,509 single-letter changes and 8,255 indels altogether, but two different software packages yielded only 4 single-letter changes linked to aspects of social behavior. A variant in the gene LEO1 was associated with aggression, for example, and one in DIP2C was tied to a macaque’s time spent grooming. Additional variants, including one in SHANK2, may be tied to behavior, but these associations met a lower statistical significance threshold or were detected by only one of the two software programs, the researchers say.

Some of the variants have not been previously reported in macaques, says Mike Montague, a postdoctoral researcher in Michael Platt’s lab at the University of Pennsylvania in Philadelphia, who was not involved in the work. The findings provide a foundation for further research, Montague says, including breeding animals with specific mutations to uncover variants’ effects.

But one limitation is the study’s sample size, Montague says. Primate researchers often don’t have access to nearly as much data as scientists who study genetic associations in people. As a result, primate studies often lack the statistical power to search for variants associated with traits outside of select genes, he says.

Gunter notes that the findings are preliminary, and three of the four variants the team detected are synonymous changes, meaning they change the DNA sequence but not the amino acids it encodes.

It’s not immediately obvious how these alterations could have behavioral effects, she says. Because the researchers only sequenced the macaques’ exomes, however, it’s possible that the variants they identified are linked to other genetic changes that they couldn’t see, such as mutations in regulatory regions of DNA or large duplications or deletions.

Gunter and her colleagues are now sequencing the macaques’ whole genomes. The team plans to look for these types of additional genetic changes and assess their ties to social behavior.