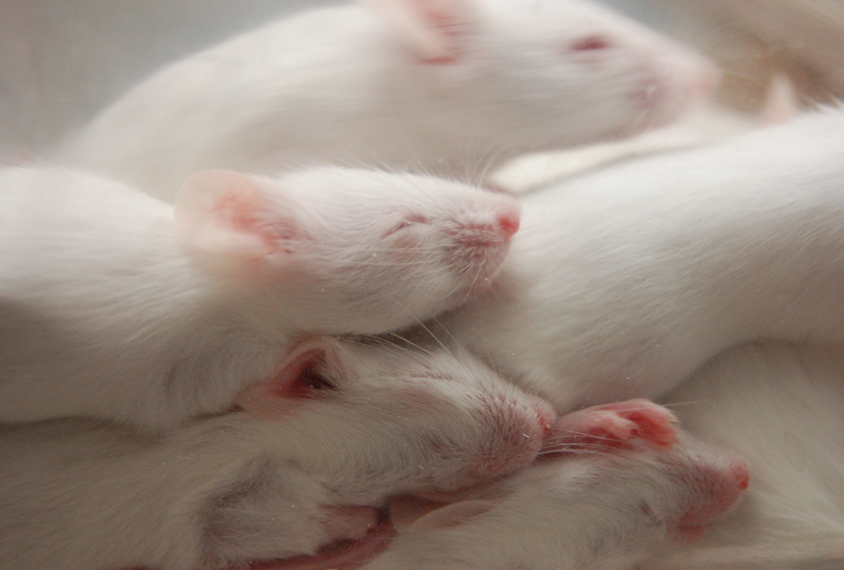 Two-hit toll: Mice missing a copy of SHANK3 that lose sleep as pups have social differences as adults.

This article was originally published in January 2021, based on preliminary data presented at a conference. We have updated the article following publication of the study in August 2022 in Molecular Autism.

Sleep disruption early in life has long-lasting consequences for mice missing a copy of the autism-linked gene SHANK3, according to a new study.

The findings suggest that the model’s genetics and sleep disruption represent a “two-hit” scenario, says co-lead investigator Graham Diering, assistant professor of cell biology and physiology at the University of North Carolina at Chapel Hill.

The researchers used an automated system to track sleep and wakefulness patterns in mice missing one or both copies of SHANK3. The gene encodes a protein that supports synapses, the junctions between neurons.

Mice with one copy of SHANK3 showed roughly the same sleep patterns as wildtype mice, regardless of age or sex — mostly sleeping during the day, waking in the evening and napping a bit as the night went on. But the mice lacking both copies of the gene slept less, on average, seldomly napping at night.

Most people with SHANK3 mutations only lose one functional copy of the gene, so the researchers focused their next steps on the mice with one copy of SHANK3. They disrupted sleep in these mice and found this had more consequences than it did for wildtype mice.

Sleep deprivation could function as an environmental factor that puts pressure on vulnerabilities caused by loss of the gene, said Julia Lord, a research specialist in Diering’s lab who worked on the study and who presented the preliminary findings virtually at the 2021 Society for Neuroscience Global Connectome on 13 January 2021. (Links to abstracts may work only for registered conference attendees.)

When the mice were 14 days old, Lord and her colleagues subjected them to 10-second sleep disruptions — a moving platform shook their cage — every couple of minutes for a week. At this age, a mouse’s brain undergoes significant cortical development.

They then put the mice through a battery of behavioral tests when they were 42 days old, the mouse equivalent of adulthood.

Male SHANK3 mice that had experienced sleep disruptions showed significant changes to their social behavior, unlike their undisturbed SHANK3 peers: In a three-chamber social test, they did not show the typical preference for spending time near another mouse. They also showed reduced startle responses to sounds. When given a warning before a startling sound, though, they showed a greater startle response than their well-rested littermates, which learned to expect the sound.

Sleep-disrupted female SHANK3 mice showed reduced anxiety-like behavior in a test involving an elevated maze, but no other differences.

“If you interfere with early-life sleep,” Diering says, “it can have lasting effects, especially in our genetically vulnerable model.”

When the sleep disruption occurred after adolescence, though, from days 56 to 63 of life, the SHANK3 mice did not show the same behavioral changes as the mice that experienced it early in life.

“These results showed very clearly that early life is distinctly vulnerable to sleep disruption and that mice gain resilience as they mature,” Diering says.