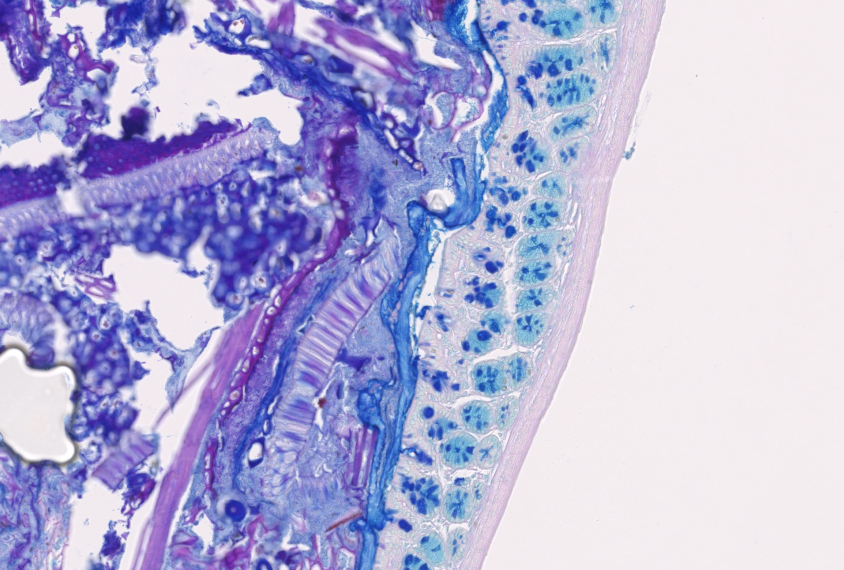 Deleting the autism-related gene CHD8 from the intestines induces significant gastrointestinal and behavioral changes in mice, according to a new unpublished study.

The results suggest that changes to the gut are involved in some of the behavioral traits seen in people with CHD8 mutations, says lead researcher Evan Elliott, assistant professor of molecular and behavioral neuroscience at Bar-Ilan University in Ramat Gan, Israel.

Elliott’s team presented the findings virtually this week at the 2021 International Society for Autism Research annual meeting. (Links to abstracts may work only for registered conference attendees.)

Up to 90 percent of people with CHD8 mutations report gastrointestinal issues such as constipation, Elliott says. Most also have autism.

Mice missing one copy of CHD8 have unusually thin and permeable small intestines, Elliott and his colleagues found. The reason seems to be that these mice have fewer mucus-producing goblet cells than controls, resulting in thinner organ walls and less mucus lining the digestive tract.

CHD8 regulates the expression of other genes, so Elliott’s team looked at gene expression levels in the CHD8 mice’s intestinal epithelial cells via RNA sequencing. The mice expressed 920 genes differently than control mice did. These include an increase in the expression of genes involved in inflammatory responses and in antimicrobial activity. The latter set may be the body’s way of compensating for increased microbial populations, Elliott says.

In a second experiment, Elliott’s team deleted both copies of CHD8 from only the epithelial cells that line the digestive tract. These mice had significantly more microbes in their gut, and a more diverse collection of microbial species, than controls had. Even though they retained both intact copies of the gene in their brains, they showed signs of increased anxiety on common behavioral tests.

“I was actually rather surprised by the behavioral finding,” Elliott says.

A potential explanation, he says, is that the mice’s thinned mucus layer may allow microbial metabolites to leak out of the gut, enter the bloodstream and reach the brain.

His team is currently experimenting with antibiotics in these mice to investigate whether altering the gut microbiome in that way can also induce behavioral changes.