Loss of insulation on neurons may contribute to autism 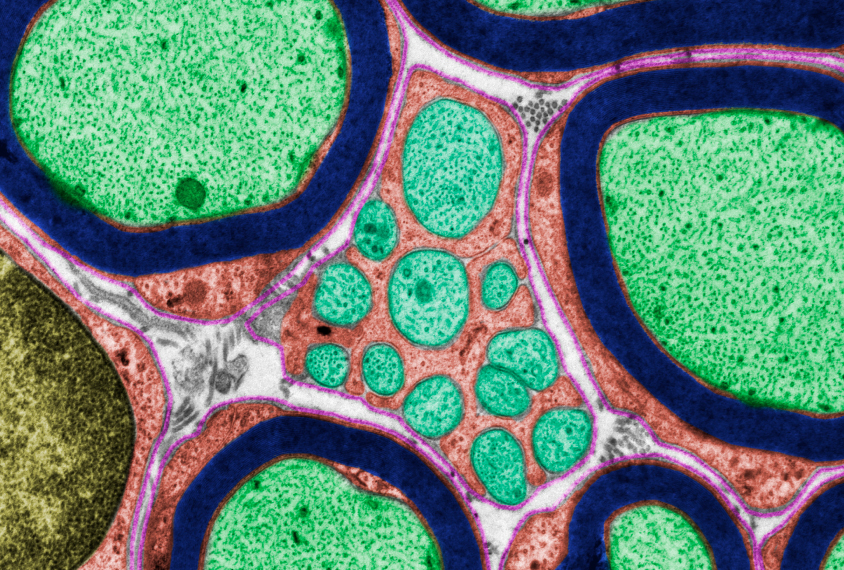 Faulty wrap: Genes involved in coating neurons with myelin may play a role in autism.

This article was originally published in October 2019, based on preliminary data presented at a conference. The results have since been published in Nature Neuroscience1.

Genes involved in the formation of myelin, a fatty substance that sheathes neurons, are altered in brain tissue from autistic people and in several mouse models. The mice also have unusually few myelinated nerve fibers.

Researchers presented the unpublished findings in October 2019 at the Society for Neuroscience annual meeting in Chicago, Illinois.

“In general, across the whole spectrum, there’s a defect in myelination,” says Brady Maher, lead investigator at the Lieber Institute for Brain Development in Baltimore, Maryland.

Myelination is the process by which neuronal fibers are coated in myelin. Myelin is made by brain cells called oligodendrocytes, and it enables fast neuronal signaling.

Maher and his colleagues saw hints that myelination is disrupted in Pitt-Hopkins syndrome, an autism-related condition caused by mutations in a gene called TCF4. Children with this rare syndrome are slow to learn to walk, and most are minimally verbal; some have autism.

The researchers analyzed gene expression patterns in five mouse models of this syndrome, each with a different mutation in TCF4. They found that in all of the mice, genes involved in myelination are among those with altered expression.

Using brain slices from the mutant mice, the researchers probed the structure and function of a nerve fiber bundle called the corpus callosum, which bridges the brain’s two sides. They found unusually low levels of electrical traffic along the myelinated branches of this bundle. Further analyses revealed that the mice have some nerve fibers with typical amounts of myelin but a dearth of these myelinated fibers.

“This makes us think that the cells that are myelinating are doing it properly, it’s just that there are not a lot of them,” says Joseph Bohlen, research associate in Maher’s lab who presented the work.

The researchers then compared gene expression patterns of the mutant mice with those of two other autism mouse models: mice with mutations in MECP2 or PTEN. All three mouse models show alterations in the expression of a shared set of 34 genes, most of which are involved in myelination.

Maher says his team is investigating why the TCF4 mutant mice have too few oligodendrocytes. They are also testing whether drugs that enhance myelination reverse the mice’s problems.