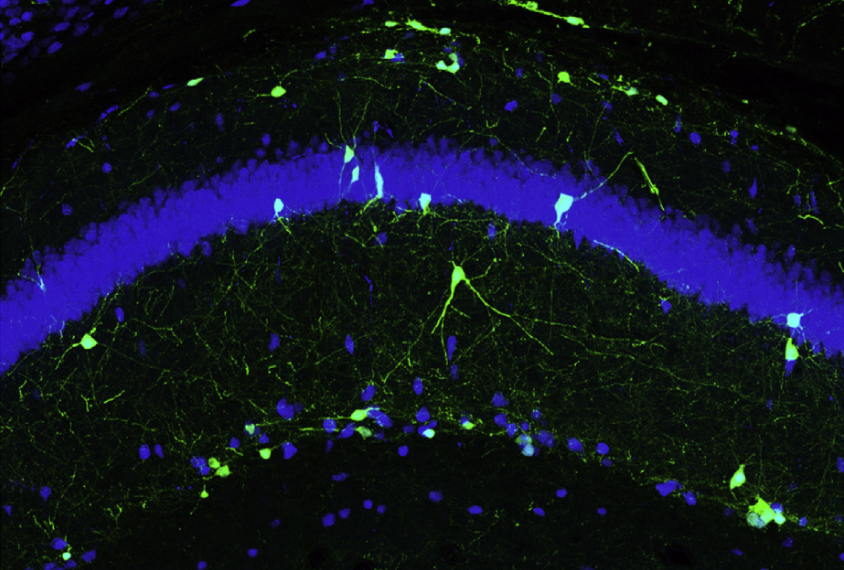 Mice lacking one copy of a leading autism gene have hyperexcitable brains and problems with learning and memory1.

Transplanting interneurons — neurons that calm brain signals — from control mice into the mutants shortly after birth prevents some of the memory problems.

Researchers presented the findings yesterday at the 2018 Society for Neuroscience annual meeting in San Diego, California.

The mice lack CHD2, which regulates gene expression by altering chromatin, the complex of DNA and protein. Another gene in the same family, CHD8, is among the top autism genes.

Most autism genes either regulate the expression of other genes or play a role at synapses, the junctions between neurons. CHD2 seems to link the two functions.

“I’ve always been interested in how you get from changes in gene regulation to changes in synaptic function and behavior,” says lead researcher Robert Hunt, assistant professor of anatomy and neurobiology at the University of California, Irvine.

The CHD2 mice have one mutated copy of the gene, as some people with autism do. The mice have low body weight and excessively curved spines, which are reminiscent of the spinal problems seen in some people with the mutation. The mice also forget objects they’ve seen before.

However, CHD8 mutations don’t affect the number of interneurons, notes Alex Nord, assistant professor of neurobiology, physiology and behavior at the University of California, Davis, who was not involved in the study.

“These genes are in the same family, but we’re having an emerging understanding of the differences between them,” he says.

Mice with a CHD2 mutation have diminished expression of hundreds of genes, many of which play a role in early development and at synapses. Of the altered genes, 123 are linked to autism, intellectual disability or epilepsy. The results were published in October in Neuron.

Excitatory neurons in the mice also appear to be affected: Their synapses are more responsive to signals than usual.

“The dual phenotypes that they found in the excitatory versus inhibitory neurons are really, really interesting,” Nord says. “It’s nice to see a story that deals with the complexity, rather than over-simplifying to the point where there’s this implicit argument that a single cell type is driving everything,” he says.

The researchers tried to restore the signaling balance by transplanting interneurons taken from fetal mice into the hippocampus of 5-day-old CHD2 mutants. The hippocampus is involved in learning and memory.

As adults, the treated mutants can learn that an object has been moved, but they do not recognize when it has been swapped with a new object.

“The results in hippocampus on behavior and memory were striking,” says Gordon Fishell, professor of neuroscience at Harvard University, who was not involved in the study.

The findings are intriguing because researchers have traditionally considered excitatory neurons, rather than interneurons, to play a primary role in learning and memory, Hunt says.

“If we can rescue memory deficits with an interneuron transplant, that implies that they are actually critically important for memory,” he says. “That’s something we’re actively trying to follow up now.”