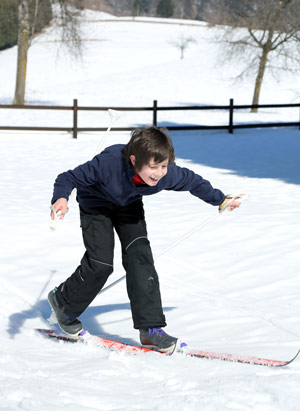 ChiccoDodiFC/Shutterstock.com Movement mishaps: Children with autism who have uneven wiring in the brain’s motor circuitry tend to have movement difficulties.

Uneven wiring in the brain’s motor circuitry predicts movement difficulties in children with autism, according to unpublished research presented yesterday at the 2015 International Meeting for Autism Research in Salt Lake City, Utah.

The study found that children with severe movement problems show unusually strong connections in motor circuits within the cerebral cortex in the right hemisphere of the brain.

“This suggests that perhaps some abnormalities in the pattern of motor connectivity contribute to the motor deficits that we see in children with autism,” says lead investigator Stewart Mostofsky, director of the Center for Neurodevelopmental and Imaging Research at the Kennedy Krieger Institute in Baltimore.

Up to 80 percent of children with autism have motor problems, which range from difficulty sitting up early in life to clumsiness later on1. Although these impairments are not considered core features of the disorder, they may contribute to the social and communication deficits at the heart of autism.

Mostofsky and his colleagues studied 43 children with autism and 80 typically developing children between the ages of 8 and 12 years. They matched the two groups for handedness and intelligence quotients (IQ).

The researchers used functional magnetic resonance imaging to examine patterns of activity in different parts of the motor cortex, a brain region involved in movement, as the children lay resting in the scanner. Brain regions that are connected tend to activate or deactivate in synchrony. The team also measured gross motor skills, such as coordination and balance, using standardized tests.

The findings suggest that unusually strong motor circuits in the right side of the brain may contribute to the movement difficulties associated with autism. However, the reverse could also be true: Movement difficulties may change the wiring of the brain. “It’s still unclear what direction the cause and effect are,” Mostofsky says.

Future studies should look at whether children with autism show alterations in the connections that span the motor regions on opposite sides of the brain, says Timothy Roberts, vice chair of research in radiology at the Children’s Hospital of Philadelphia, who was not involved in the study.