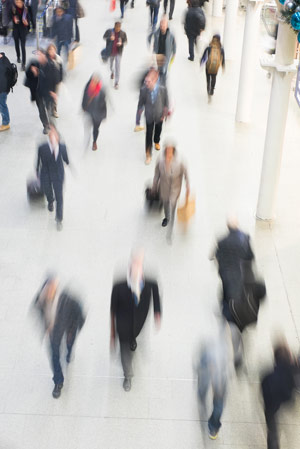 alice-photo/Shutterstock.com People-watching: Children with autism excel at judging the overall direction of a group of moving objects, such as a crowd of people.

Children with autism detect certain kinds of motion better than their peers do, but don’t tune out distracting visuals, according to a study published 6 May in the Journal of Neuroscience. The findings may help explain why many of these children experience sensory overload1.

People with autism may have problems perceiving motion. In particular, they often have difficulties judging the overall direction of collective movement — for example, of a crowd of people or a set of marbles. Researchers long assumed that the reason for this tendency was an inability to integrate pieces of a scene into a bigger picture.

But the new study suggests that integration isn’t the problem. In fact, people with autism seem to do that part of the visual judgment unusually well. Their trouble is more likely to stem from a leaky sensory filter, which may also explain why some people with autism react strongly to ordinary sensations.

“Our findings teach us something new about how children with autism process information about what they see,” says Catherine Manning, the study’s lead researcher and a junior research fellow of experimental psychology at the University of Oxford in the U.K. “This difference may help us to understand the sensory symptoms faced by some children with autism.”

Brain imaging studies should investigate the neural mechanisms behind this filtering problem, says Kevin Pelphrey, professor of psychology at Yale University, who is not involved in the research.

Researchers often test perception of moving objects using dots. The participants look at a field of dots in which some dots move together as a group and others move randomly.

People with autism need a larger sampling of dots moving as a unit than their typical peers do to discern the direction, but no one knew why this is so. Many experts assumed the reason stemmed from a difficulty combining information about the different points. But others suggested that people with autism are poor at estimating the direction of individual dots, or that they have trouble filtering out irrelevant dots.

To explore these alternatives, the researchers asked 33 children with autism and 33 typically developing children from 6 to 13 years old to tell them the overall direction the dots on a computer screen were moving in.

When all the dots were going in the same direction, children with autism estimated their direction as well as the other children did, ruling out the idea that they are poor at discerning the paths of individual dots.

When the dots were moving in different directions, however, the researchers were surprised to find that children with autism were better than controls at determining the overall direction of the dots. This advantage fell away when children with autism also had to ignore randomly moving dots.

This result runs counter to what many experts have long thought about perception in autism.

“I always thought that people with autism focused on the details of things, with a reduced tendency to combine information together in order to see the overall picture,” says Manning, who conducted the research as a doctoral student in Elizabeth Pellicano’s lab at the University of London. “Our results show that this isn’t always the case, at least for moving information.”

The researchers concluded that although people with autism may excel at analyzing groups of moving objects — a flock of birds, say — they have trouble blocking out distracting information such as a mosquitoes swarming in the foreground. This tendency may help explain why people with autism have difficulty making sense of a complicated world.

“In most [real-life] situations, there are also other objects that might be moving in different directions,” Manning says.

A filtering problem could also contribute to sensory sensitivity in people with autism. Exaggerated reactions to sounds, textures, lights or patterns affect up to 70 percent of people with autism. An inability to tune out extraneous sensations might cause such sensations to be overwhelming, the researchers say.

The researchers plan to replicate their unexpected findings. David Simmons, a lecturer in psychology at the University of Glasgow who is not involved in the study, says he is planning to test whether people with autism have difficulty filtering out irrelevant details when using other senses, such as hearing and touch.