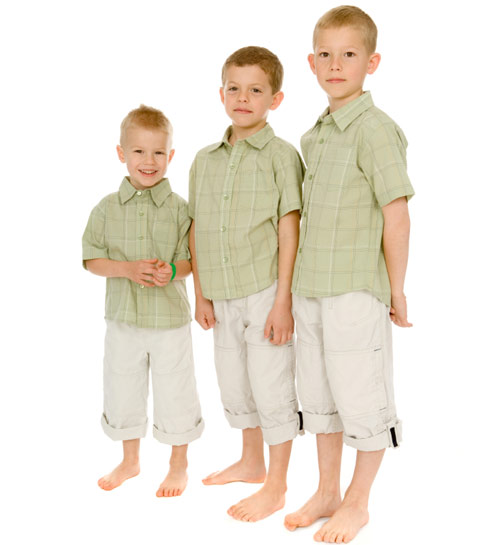 Risky rank: Middle children in families that have more than one child with autism are at higher risk of the disorder compared with either their older or younger siblings.

In families that have more than one child with autism, the middle children, particularly those born second, have a higher risk of developing autism than other children in the family, according to a study published 19 October in PLoS One1. In families that have only one child with autism, however, risk of the disorder rises with each additional birth, the study found.

This birth order effect in simplex families, in which only one child has autism, is only apparent in male children, however. Females do not show any difference in risk with their birth order. This may be because of the disorder’s higher prevalence in males, the researchers say.

The findings also suggest that sequencing studies alone are unlikely to explain autism, says lead investigator Aravinda Chakravarti, professor of molecular biology and genetics at the Johns Hopkins School of Medicine in Baltimore. “If autism were a purely genetic disorder, then the distribution of affected children should be random,” Chakravarti says. “But what we find is that it is highly non-random.”

The researchers based these findings on a statistical analysis of birth order and autism in three large collections of families with the disorder. The Autism Genetic Resource Exchange (AGRE) and the National Institute of Mental Health (NIMH) Autism Genetics Initiative collect data primarily from multiplex families — those in which more than one child has autism. The Simons Simplex Collection (SSC), funded by SFARI.org’s parent organization, is composed of families that have only one child with autism, and unaffected parents and siblings.

In multiplex families, the curve is shaped like an inverted V, peaking at the second-born child. In simplex families, by contrast, it arcs upward in a long slope for each additional child.

“This is an intriguing paper that deserves careful reading,” says statistician Gregory Young, assistant research scientist at the MIND Institute at the University of California, Davis, who was not involved with the study. “What surprised me the most was the apparent difference in birth order effects in the simplex versus multiplex families.”

The peak in risk for second-born children and subsequent drop in multiplex families may be illusory, however, Chakravarti says. “What you are seeing is the result of fewer families with more than three children,” he says. As the number of children on the tail of the curve drops, the number of affected children decreases as well.

Studies have consistently shown a higher risk of autism in siblings of children with the disorder. The largest study of sibling risk, published in August, reported that children who have more than one sibling with autism have a one in three chance of developing the disorder.

Like the new study, that study also found that the risk is higher for boys, who are almost three times more likely than girls with the same family history to develop the disorder2.

But the study did not find an association between the siblings’ birth order and autism risk, notes Young, who was an investigator on that study.

“We did not find an effect, but this may simply have been due to our not having enough subjects rather than meaning that no effect exists,” he says. He and his colleagues looked at 664 high-risk infants, compared with more than 1,700 families in the new study.

Sibling studies also typically focus on families in which at least one child already has autism, notes Lonnie Zwaigenbaum, associate professor of pediatrics at the University of Alberta in Canada. But the diagnostic status of an infant sibling is usually unknown at the time of the study, and more children could later be born into those families, potentially altering the results, he says.

Birth order can also affect the severity of symptoms among affected children. A 2007 study, for example, found that first-born affected children have more repetitive behaviors, but better language skills, than second-born siblings3.

Another study presented at the 2010 Society for Neuroscience annual meeting reported that younger children with autism in multiplex families have more social deficits and lower intelligence quotients (IQs) than their older siblings.

The new study complements those findings, says Loren Martin, the lead investigator on that study and associate professor of psychiatry at Azusa Pacific University in California. “Taken together, these results suggest that some cases of autism likely stem from gene-environment interactions,” he says.

For example, he says, several studies suggest that antibodies produced in the mother in response to an infection can alter protein expression in the fetal brain, potentially disrupting development4.

Maternal-fetal incompatibility is another possible explanation for the higher risk of autism in later-born children, adds Chakravarti.

Social and demographic factors may also play a role in autism risk. There is some evidence, for instance, that the rising age of parents, in particular the father’s,may explain why the risk of autism rises with each additional birth. Studies in mice have shown that the offspring of older male mice harbor more spontaneous, or de novo,mutations.

In an opinion piece in Science published earlier this year, Chakravarti expressed his doubt that genetic studies alone can unravel complex diseases. “We need to answer not only which DNA variants in which genes lead to disease, but how they do so,” he says5. “Genomics is not enough.”