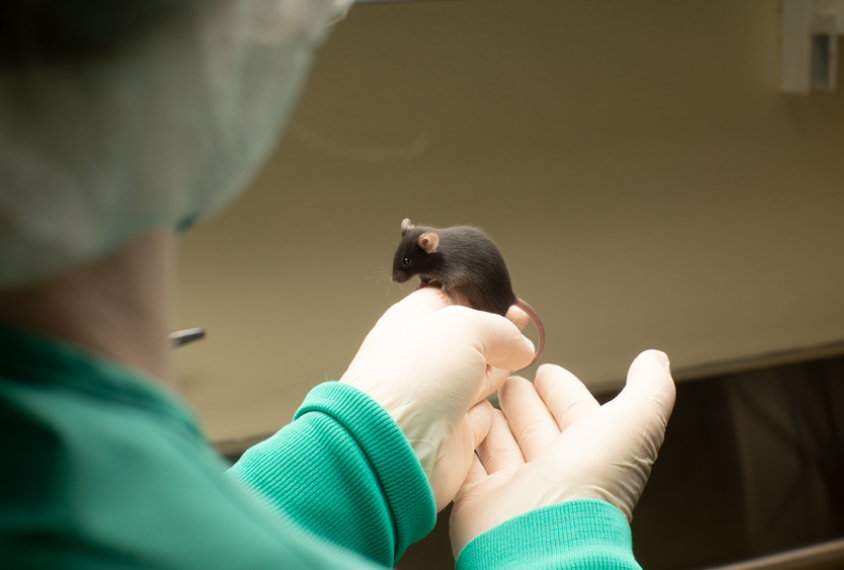 Massive expansion: Hundreds of nucleotide repeats in the FMR1 gene in mice cannot mimic their effects in people.

A large mutation that leads to fragile X syndrome in people does not set off the same genetic cascade in mice, a new study shows. The work highlights the limitations of using mice to model the condition and the need to explore other model animals, the researchers say.

Fragile X syndrome, which causes intellectual disability and sometimes autism, stems from the expansion of a repeated sequence of three nucleotides — cytosine followed by two guanines (CGG) — in the FMR1 gene. People with fragile X have more than 200 CGG repeats, which silences the gene by way of methylation. (People with 55 to 200 repeats, described as a premutation, can have different but related health conditions.)

In mice, however, FMR1 remains unmethylated and unsilenced even when the animals carry as many as 341 CGG repeats, the new study shows.

The result is not unanticipated, says study investigator Steven Colvin, a graduate student in Guoping Feng’s lab at the Massachusetts Institute of Technology. FMR1 remains unmethylated in other mice that have expansions exceeding 200 CGG repeats, multiple studies have demonstrated.

But Colvin and his team wanted to make sure that even larger expansions would show the same result, paving the road away from mouse models for fragile X. In 2019, Feng’s lab developed a rhesus monkey model with a mutation in SHANK3, another autism-linked gene.

“I thought that this would be a good model where if we could demonstrate that there was no methylation in the mice more conclusively, it would justify moving fragile X research into non-human primates,” Colvin says.

The new mice carry an expansion from a person with fragile X syndrome instead of the typical repeat region of the mouse FMR1 gene.

Unlike in people with fragile X syndrome, FMR1 remained partly functional in the mice, which showed elevated levels of FMR1 mRNA in multiple brain areas, including the cerebellum, hippocampus and striatum. But their levels of FMRP, the protein FMR1 encodes, were reduced in the cortex and cerebellum to about 25 percent of wildtype levels.

The work appeared in August in eNeuro.

The FMR1 gene also remains unsilenced in some people with 200 or more repeats, says Randi Hagerman, medical director of the MIND Institute at the University of California, Davis, who was not involved in the work. But those people usually do not have fragile X syndrome.

And the new work confirms that mouse and human genetics are different enough that scientists can’t make a mouse model that is genetically analogous to the human condition, says Elizabeth Berry-Kravis, professor of pediatrics and neurological sciences at Rush University Medical Center in Chicago, Illinois, who was not involved in the study.

It’s not clear why the gene doesn’t methylate in mice, Hagerman says. Before moving to nonhuman primates, though, which would be an expensive endeavor, she says it would be worth finding out whether excess CGG repeats lead to methylation in rats.

Colvin and his colleagues say they have no plans to work on a rat model. Instead, they say they hope to start devising a CGG expansion model in monkeys as a long-range project.

This story has been modified to remove an incorrectly paraphrased quote, attributed to Elizabeth Berry-Kravis, about the validity of fragile X knockout mice.