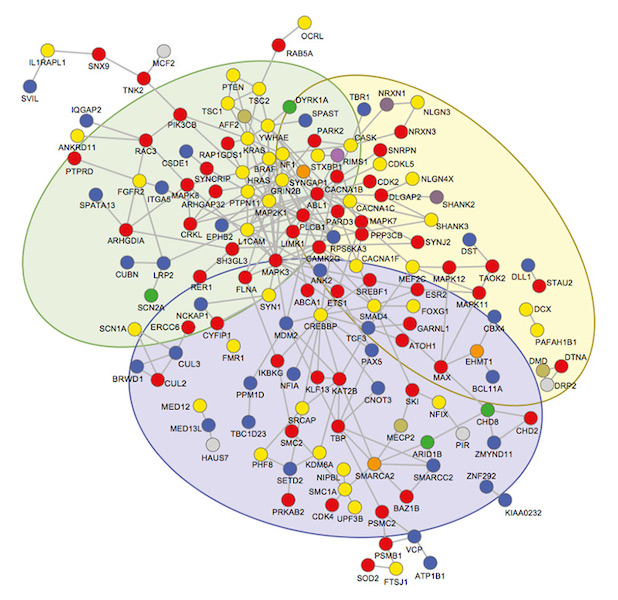 Enlarge image &gt;&gt;Converging roles: Many of the genes mutated in people with autism are involved in gene expression and neuron growth.

People with autism tend to carry mutations that duplicate or delete several genes at once, according to a large study published 1 May in the American Journal of Human Genetics1.

Previous studies have shown that people with autism have more large deletions or duplications of DNA, also known as copy number variations (CNVs), than controls do. The new study, the largest to look at CNVs in people with autism thus far, confirms this finding. It also found that in people with autism, the CNVs are more likely to affect genes linked to intellectual disability and fragile X syndrome.

“It’s very nice in a field such as autism to be able to find the same results in larger samples, because the field has been suffering from non-replicated data,” says Catalina Betancur, director of research at INSERM in Paris, France, who led the study along with Stephen Scherer.

The study may also serve as a guide for doctors, who must interpret the impact of particular CNVs for their patients, says Scherer, director of the Centre for Applied Genomics at the Hospital for Sick Children in Toronto. Clinicians routinely use tests that detect CNVs, called microarrays, to diagnose and treat individuals.

Many CNVs are rare and can lead to varying symptoms. For example, the researchers identified 84 CNVs in people with autism, across 36 genomic regions, that would be expected to lead to symptoms.

“We detail how a clinical geneticist who is finding a microarray result needs to walk through their interpretation,” says Scherer. “We try to present it as a guide book.”

The researchers scanned the genomes of a total of 2,446 people with autism, 4,417 of theirparents and 4,768 controls. The participants are members of the Autism Genome Project and were recruited from 50 sites in North America and Europe. The researchers published results from about half of these individuals in 2010.

They reported then that people with autism have more CNVs in protein-coding regions of the genome than controls do. The new study adds data from 1,604 families and greatly expands the number of genes found in the autism-linked CNVs.

“This is a nice collation of data from what is now a very large set of samples,” says David Ledbetter, chief scientific officer of Geisinger Health System in Danville, Pennsylvania, who was not involved in the study.

In the past few years, several studies have shown that spontaneous, or de novo, mutations contribute to the risk of developing autism. Scherer and his team found 102 de novo CNVs in about 2,100 people with autism. These CNVs are larger and include about four times more genes than the 77 de novo CNVs found in about 3,500 unaffected individuals.

To find de novo mutations linked to autism, researchers have generally focused on ‘simplex’ families, those that have a single child with autism and unaffected parents and siblings. The new study found that children in simplex families carry about the same number of de novo CNVs as do children from multiplex families.

“This is surprising and warrants follow up,” says Dan Arking, associate professor of genetics at John Hopkins University School of Medicine in Baltimore.

The researchers also found 84 CNVs known to be harmful, including 20 that were inherited, in the participants with autism. The result is a reminder that inherited mutations are also important in autism, Betancur says. “This is something the field has forgotten a little bit in the past few years.”

Many of the genes found in the autism-linked CNVs function at synapses, the junctions between neurons. The list also includes several targets of FMRP, the protein missing in fragile X syndrome.

To home in on the role of the remaining genes, the researchers mapped interactions between these genes and another group of known autism candidates. The genes in this second set carry a de novo mutation that affects a single DNA base in some people with autism.

Many of the genes group together in pathways that regulate the correct migration of neurons in the brain during development, and a signaling pathway called MAPK that helps regulate cell growth.

A number of the genes also regulate gene expression by modifying the structure of chromatin — the compact package of DNA in the cell’s nucleus. For example, the researchers found a deletion that includes a chromatin regulator, called CHD2, in two brothers with autism, intellectual disability and unusual facial features. Neither of the boys’ unaffected parents have this deletion, suggesting that the region is prone to spontaneous mutation.

“The study identified chromatin and transcriptional regulation as another really exciting area to move towards,” says Arking.

“Not all of the genes are going to map into these pathways,” he says. “A really important question at the end of the day is, what percent will?”

Jessa Netting contributed to the reporting of this article.