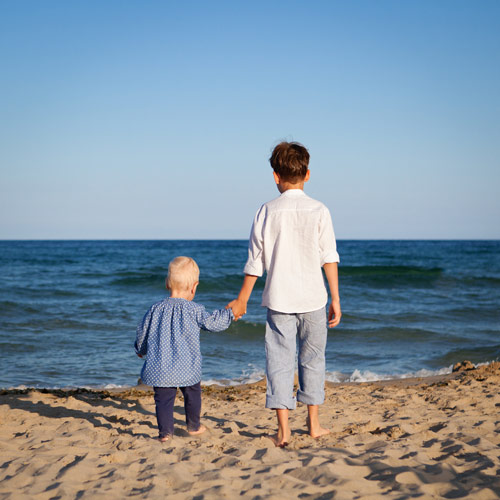 Girl power: At 3 years of age, 10 percent of younger sisters of children with autism are diagnosed with the disorder. RimDream/Shutterstock.com

One in every five younger siblings of children with autism will end up being diagnosed with the disorder, according to the largest analysis to date of these ‘baby sibs.’

The results, in press at Molecular Autism, were presented in a poster yesterday at the 2015 International Meeting for Autism Research in Salt Lake City, Utah.

Early studies pegged the so-called ‘recurrence’ rate in baby sibs at between 3 and 10 percent. Then, in 2011, a study of 664 baby sibs brought the estimate up to 18.7 percent. The new study confirms the higher estimate.

“We’re confirming with the largest sample the 20 percent recurrence rate overall,” says Daniel Messinger, professor of psychology at the University of Miami in Florida, who presented the results.

Messinger and his colleagues analyzed autism risk in 1,241 baby sibs and 583 controls at 15 sites across the U.S. They found that 26.7 percent of younger brothers and 10.3 percent of younger sisters of children with autism were diagnosed with the disorder by age 3.

Among both baby sibs and controls, girls do better than boys on tests of cognitive function and have fewer restrictive interests and repetitive behaviors. In fact, there are no sex differences in the baby sib group beyond those also seen in the controls.

For example, in a separate poster by Sarah Edmunds, a graduate student in Wendy Stone’s lab at the University of Washington in Seattle, the researchers evaluated 74 baby sibs and 48 controls for their ability to speak and understand language.

At 36 months, girls in the baby sib group speak more fluently than the boys do but understand language at about the same level, the study found. Girls and boys in the control group show the same trend.

“There could be more subtle sex differences if we used an eye-tracking assay or other measures, but here we’re looking at a large sample with a common battery of measures,” Messinger says.

His study also shows no difference in the risk of autism for siblings of girls versus boys with autism.

Girls are thought to somehow be protected from autism, meaning that they need many more mutations than boys do to develop the disorder. As a result, their younger siblings would also presumably be hit hard — but the study did not find evidence of this phenomenon.

“It suggests that if there’s a female protective effect, its manifestation is not powerful enough to be seen in a sample of over 1,000,” Messinger says.

Another poster, presented by geneticist Stephan Sanders, may explain why this is so.

Based on a population simulation, Sanders says researchers would need to look at more than 10,000 people with autism to document the female protective effect. In fact, he says, “I’ve not yet been able to run the simulation far enough to work out where the power rises, but I expect it’s probably around 100,000 to a million [cases].”

Given that autism’s prevalence is roughly 1 percent, this means researchers would need to look at between 10 and 100 million people in the general population, says Sanders, associate professor of psychiatry at the University of California, San Francisco. “It is basically a numbers game.”