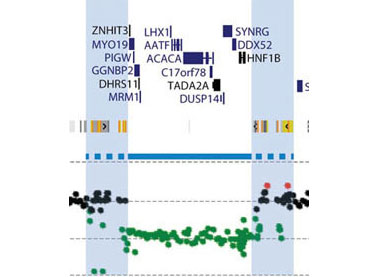 Risk region: The new study rigorously links the 17q12 region, and the 15 genes within, to autism.

Deletion of the chromosomal region 17q12 dramatically increases the risk for autism and schizophrenia, according to a large study published last week in the American Journal of Human Genetics1. Individuals missing this sizeable region are about 14 times more likely to develop one of those disorders, the study reports.

In the past few years, scientists have identified numerous copy number variations (CNVs) — deletions or duplications of a segment of DNA — in people with autism2 or schizophrenia3. Each CNV is rare, though, making it difficult to link it strongly to a given disorder. The new study found the same deletion in 24 of 75,719 individuals – 20 with autism or delayed development, and 4 with schizophrenia.

This study is the first to rigorously link the 17q12 region — and the 15 genes within — to autism. It is also consistent with other findings that suggest that autism and schizophrenia can stem from the same genetic anomalies4.

“The overlap is increasingly interesting and increasingly important,” says David Ledbetter, who led the study while he was professor of human genetics at Emory University in Atlanta. “The question now is whether there is a subset of autism cases and a subset of schizophrenia cases that really are the same brain disorder, but can manifest slightly differently or be diagnosed slightly differently.”

Although 17q12 deletions had been found before, they were associated with kidney malfunction and diabetes5. But reports in the past year have described cognitive impairments6 and autism7 in a few individuals with the deletion.

“The important thing in this paper is that they extend the phenotype to include neurocognitive problems,” says Evan Eichler, professor of genome sciences at the University of Washington.

Eichler’s team first described multiple cases of the deletion in 2007 in stillborn fetuses marked by kidney malformations, and in children with kidney problems or diabetes. Eichler says his study may not have picked up behavioral abnormalities because some people with the deletion may have few or no such problems.

“My personal hunch is that these deletions are extremely variable,” Eichler says, adding that the challenge is to understand the range, severity and frequency of symptoms found in those with the deletion.

In the new study, the researchers scanned the results from standard genetic tests that identify CNVs throughout the genome for 15,749 people referred for autism spectrum disorders, delayed development or intellectual disability. These data came from seven clinical laboratories around the country.

The initial screen identified the 17q12 deletion in 18 individuals, but none of 4,519 controls. Detailed examination of eight of these cases revealed that the mother of one also has the deletion. Of these nine, most have abnormally large heads, mild-to-moderate cognitive impairments, kidney problems, and anomalies in the genital or urinary tracts. Strikingly, four have autism and two others have some features of the disorder, including stereotyped behaviors and difficulties with social responses.

“We were surprised to find such a high percentage meeting autism criteria,” says Ledbetter, who is now chief scientific officer at Geisinger Health System in Danville, Pennsylvania.

To confirm a link to autism, the researchers looked at genetic testing results from individuals diagnosed with autism in databases maintained by the Simons Simplex Collection, and by deCODE Genetics. This search turned up two more instances of the 17q12 deletion in autism, but not in controls.

Because CNVs elsewhere in the genome are associated with both autism and schizophrenia, the researchers then looked at genetic data from two schizophrenia collections maintained by SGENE and by the Genetic Association Information Network. They found 4 more cases of 17q12 deletion among 6,340 people with schizophrenia, and none in 43,076 controls.

All together, 24 of 23,271 individuals with autism, schizophrenia or another neurodevelopmental disorder carry this deletion, compared with none of 52,448 controls.

Although these are large numbers, they may still fall short of what is needed for a full picture of the effects of 17q12 deletions, says Sau Wai Cheung, professor of molecular and human genetics at Baylor College of Medicine in Houston, Texas, who was not involved with the work. “So far the study is the biggest, but having a hundred or more cases will be more reliable,” she says.

Different research groups focus on different symptoms, which can affect their description of the deletion. For example, Cheung’s study last year described cognitive impairments in three 17q12 deletion carriers, but only studied people with intellectual disability, and did not examine them for specific features of autism. “So that’s a problem with the literature now for 17q12 deletions,” Cheung says.

One attractive candidate for autism in the region is LIM homeobox 1, or LHX1. It encodes a protein needed to generate Purkinje cells, a class of neurons whose numbers are thought to be diminished in the brains of some people with autism8. LHX1 is also required for guiding neurons to their proper place in the developing brain9.

Ultimately, honing in on which of the 15 genes in the 1.5 megabase region contribute to brain development may require selectively deleting each one in a mouse model.

Alternatively, people with smaller deletions of the region could help pinpoint the key genes. For example, loss of one of the genes, HFN-1-beta, is known to cause problems with the kidneys and pancreas, and diabetes. Although cognitive or social abnormalities reminiscent of autism and schizophrenia have not been described in these people, previous studies may have missed larger deletions in the region, Ledbetter notes.

“When we started calling diabetes and nephrology physicians to ask them about neurocognitive impairments in these patients,” he says, “they basically said they don’t pay attention to that.”