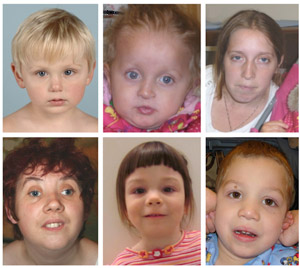 Deletions in the autism-linked gene AUTS2 trigger a variety of symptoms, including intellectual disability, developmental delay, a small head and unusual facial features, suggests a large study published 7 February in the American Journal of Human Genetics1.

The study, led by Erik Sistermans and his collaborators at Vrije University Medical Center in Amsterdam, combines results from genetic tests of nearly 50,000 people collected at multiple labs worldwide.

Along with another study, published 17 January in PLoS Genetics2, it also found that dampening expression of the gene in zebrafish embryos results in fish that have smaller heads than controls do.

AUTS2 has previously been linked to autism3, but the new results make a strong case that deletions in the gene can cause autism and other disorders.

“There was circumstantial evidence the gene was involved, but not proof,” says lead investigator Sistermans, head of genome diagnostics at the center. “For the first time, we have real proof this gene is involved.”

“This is clearly a pathogenic mutation,” says David Ledbetter, chief scientific officer at Geisinger Health System, who was not involved in the study.

The findings also suggest that AUTS2 should be included in genetic tests for autism or intellectual disability, says Ledbetter. “It should go on everybody’s clinical list of known autism causative genes and should be added to sequencing panels,” he says.

AUTS2 is fascinating beyond its role in autism. Most genes belong to related families, defined by similar genetic sequences, but AUTS2 has no relatives in the genome. In 2010, sequencing of the Neanderthal genome revealed that part of this gene has evolved rapidly since humans and Neanderthals diverged in evolution4.

“AUTS2 is a mystery in part because we don’t have any other genes to compare it with,” says Robert Hevner, professor of neurological surgery and neuropathology at the University of Washington School of Medicine in Seattle, who was not involved in the study.

The researchers first became interested in AUTS2 after discovering a deletion in the gene in an individual who had been referred to their clinic for genetic testing about three years ago. A literature search revealed that very little was known about the gene.

After the researchers presented the findings at a conference in 2010, similar reports began pouring in from other labs.

“Many labs had one or two patients with comparable deletions but were unable to determine if the deletion was really driving the disorder or not,” says Sistermans.

By pooling the data, the researchers discovered that people with the deletions have a variety of symptoms and that the deletions themselves come in many flavors, striking different parts of the gene.

Those who are missing early parts of the gene tend to have milder symptoms than those lacking the latter portions. Of the 17 people for whom researchers have extensive clinical information, 7 have autism or signs of autism.

The researchers estimate that deletions in the protein-coding portion of AUTS2 strike about 1 in every 2,000 people with intellectual disability or multiple birth defects.

However, the study did not look at the rate of single-letter mutations in the gene, which may be more common than CNVs, notes Ledbetter. “They have not been identified yet in any large-scale way, so the total impact on autism causality should be much greater,” says Ledbetter. “I would predict a rate of 1 in 1,000.”

Ledbetter adds that the study, which had almost no funding, highlights the benefits of using clinical data for research. “If you can make the data freely available for research, it becomes very cheap to do discovery work, to identify single-gene and other causes of autism and intellectual disability.” 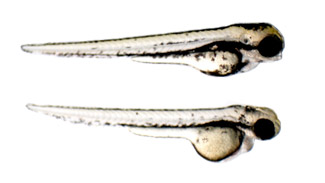 Shrunken heads: Suppressing AUTS2 expression in zebrafish decreases the size of their heads.

Shrunken heads: Suppressing AUTS2 expression in zebrafish decreases the size of their heads.

“That tells us that in some way, AUTS2 is necessary for the normal amount of growth and number of neurons in the brain,” says Hevner.

Ahituv and his collaborators found that the zebrafish lacking AUTS2 move much less than controls do, and the fish’s brain cells die and proliferate more than those of controls.

The team also identified parts of the gene, known as enhancers, that boost gene expression in certain parts of the body — in fish and mice — or during specific periods of development. The researchers presented preliminary results from the study at the 2011 International Congress of Human Genetics in Montreal, Canada.

Sistermans’ team found that adding just the latter part of the human gene is sufficient to normalize head size. That finding is in line with the observation that people with deletions in this region have more severe symptoms overall.

The new findings start to define the role that AUTS2 plays in the brain, but more research is needed to truly understand the gene’s function. Defects in the gene have been linked to attention deficit hyperactivity disorder, dyslexia and epilepsy, and a common variation in the gene has been tied to the regulation of alcohol consumption5.

Some research suggests that AUTS2 helps to regulate the expression of other genes, an idea that Ahituv aims to explore by looking for genes that AUTS2 binds.

Hevner’s lab and others are developing strains of mice that either delete the gene or lower its expression only in the brain.

AUTS2 is highly expressed in the developing cortex of mice. Hevner says that’s interesting because defects in the growth and development of the frontal lobe, a region at the front of the cortex involved in many complex cognitive processes, have been documented in autism.