Large genetic deletion leads to autism, but not always 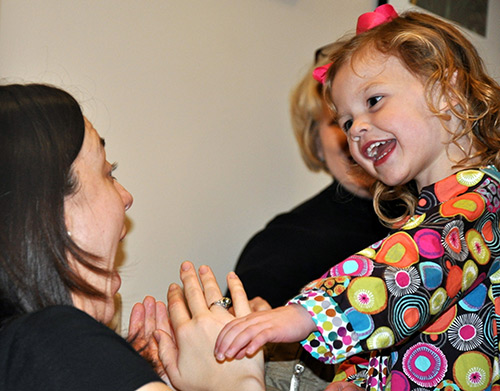 Friendly face: Children with a deletion in the 16p11.2 chromosomal region may struggle to engage with others, but unlike many with autism, appear to enjoy social contact.

To characterize people who carry deletions in 16p11.2 and 15q13.3, genetic regions linked to autism, two studies published this summer looked in detail at dozens of people with either deletion. The studies found that deletions in these regions lead to diverse symptoms that only sometimes include autism.

The 16p11.2 region is among the top candidates for autism risk. Deletion or duplication of the 600-kilobase region has been found in as much as 1 percent of people with autism. In one of the new studies, published 16 June in Biological Psychiatry, researchers characterized 85 children who have 16p11.2 deletion and 153 of their unaffected family members1.

They found that 16p11.2 deletion leads to a constellation of symptoms that don’t fit neatly into any one diagnostic category.

Of the 85 children with the deletion, 20 meet the criteria for an autism diagnosis. But these individuals all look subtly different from those with classic autism, says lead researcher Raphael Bernier, associate professor of psychiatry at the University of Washington in Seattle.

The children are “quirky” and struggle to engage with others, something Bernier describes as “social immaturity.” But unlike children with classic autism, they seek out social contact, he says.

“We anticipated seeing a bunch of kids who have autism and we ended up seeing a whole bunch of a lot of different things,” he says. “It’s almost as if ‘diagnostic confusion’ is the phenotype for 16p11.2: It’s almost autism, but not quite autism.”

The second study, published 31 July in Genetics in Medicine, found that deletion of 15q13.3 similarly leads to a wide range of symptoms2.

Of the 246 people in the study, 80 percent have a diagnosis of at least one neuropsychiatric disorder, including autism, epilepsy, schizophrenia, speech problems and attention deficit hyperactivity disorder. The most common feature is intellectual disability, in roughly 58 percent of cases.

However, individuals with a 15q13.3 deletion look clearly distinct from each other, says lead researcher Anne Bassett, professor of psychiatry at the University of Toronto. “Now the next step is trying to identify what the modifying factors are with respect to this very broad expression,” she says.

The two new studies make an interesting contrast, as they each use very different methods to answer the same question: How do we carefully define the features of a genetic deletion?

In the 16p11.2 study, clinical experts examined each individual at one of three sites across the country. (The project, called the Simons Variation in Individuals Project, is funded by the Simons Foundation, SFARI.org’s parent organization.)

“The beauty of the study is that it really is a state-of-the-art assessment battery,” says Sylvie Goldman, clinical assistant professor of neurology and pediatrics at Albert Einstein College of Medicine in New York, who was not involved in either study. But this method is expensive, and not possible to do routinely.

For the 15q13.3 study, the researchers searched the literature for descriptions of individuals with the deletion. They collected data from 246 such people, including 113 adults — 7 of whom they identified themselves. They did not find a single 15q13.3 deletion in the genomes of nearly 24,000 controls.

“It’s the first time we have a reliable review of the syndrome,” says Catalina Betancur, director of research at INSERM in Paris, France, who was not involved in the studies. “It confirms that this is a [deletion] with a much stronger effect than what I thought.”

Most people with the deletion inherited it, and more often than not from their mother. This is unusual, as it suggests that despite its strong effects, the deletion does not alter an individual’s likelihood of having children.

“It’s almost as if ‘diagnostic confusion’ is the phenotype for 16p11.2: It’s almost autism, but not quite autism.”

Overall, the study’s method is less rigorous than the detailed assessments in the 16p11.2 study, notes Helen Tager-Flusberg, director of Research on Autism and Developmental Disorders at Boston University, who was not involved with either study. Still, “the paper made up for the limitations in the phenotyping battery by pulling together really a remarkably large number of cases,” she says.

By carefully characterizing the features of each syndrome, both studies revealed new insights about these already well-characterized mutations.

Overall, the 16p11.2 study found that children with the deletion tend to be clumsy, have trouble with speech and have lower intelligence quotients (IQs) and social skills than their family members do. Overall, IQs in children with the deletion range from 25 to 130, with an average of 83. This range is about 27 points lower than the IQs of their unaffected family members.

“You get a nice view of the impact that [copy number variations] have on IQ,” says Betancur. The researchers also see a similar shift in social deficits and repetitive behaviors in children with the deletion.

It would be interesting to compare these children with a control group in the same IQ range, notes Catherine Lord, director of the Institute for Brain Development at New York-Presbyterian Hospital in New York City. Low IQs can often lead to problems with language or social interaction; conversely, children with language problems often do poorly on intelligence tests.

“The trouble is we don’t know what’s causal and what’s correlated,” Lord says. “So we have to be very careful.”

The study also found that 19 percent of people with the deletion are left-handed and 29 percent use both hands interchangeably, compared with 3 percent and 11 percent, respectively, of their unaffected family members. Although the significance of this finding is unclear, it hints at differences in the brain’s symmetry.

This finding is “incredible” and a credit to the study’s in-depth approach, as routine clinical tests don’t assess handedness, says Betancur.

What neither study resolves, however, is how the same deletion can lead to such wide-ranging effects. “We really don’t know where this variability comes from,” says Tager-Flusberg. “The picture is way more complicated than we thought, and I think that’s important for us to know.”