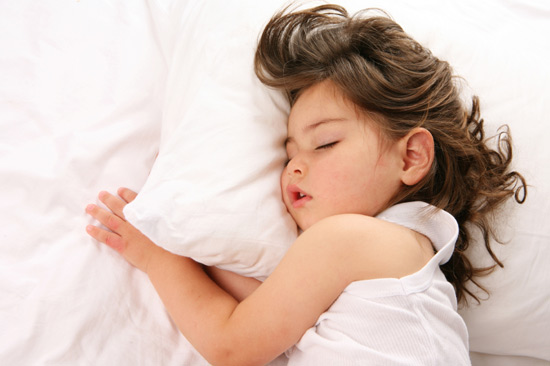 Sleeping beauty: When children with autism hear a bedtime story while they sleep, they show more activity on the right side of the brain, rather than the left.

Brain imaging reveals distinct signatures in the language circuits of young toddlers with autism while they sleep, according to unpublished data presented yesterday at the IMFAR 2010 meeting in Philadelphia.

When sleeping toddlers with autism hear language, they show more activity in the right superior temporal gyrus, a major hub for language processing, the researchers found. This is strikingly different from healthy controls, who show more activity in this region on the left side of the brain. In the healthy adult brain, grammar and vocabulary are processed mainly in the left side of the brain.

Although the patterns in children change slightly over time, left-hemisphere dominance is always greater in healthy children than in children with autism between ages 1 and 4, says Lisa Eyler, assistant adjunct professor of psychiatry at the University of California, San Diego, who presented the work. “This could be used as a sensitive, brain-based biomarker to use as an early warning sign of autism,” she says.

In the first few years of life, children make enormous gains in language development — a critical process that is severely delayed or impaired in many children with autism.

“What is not known, however, is how the brain response to language is changing and developing during this same period of time,” Eyler says.

Two years ago, researchers in Eyler’s group devised a clever method of measuring brain response to language in 3-year-old children with autism, who often have trouble keeping still inside a brain scanner. When children fall asleep in the machine, the researchers play a recording of a bedtime story, sometimes read normally, and sometimes played backwards.

When they hear the intelligible version of the story, healthy children show greater activity on the left side of the brain, whereas children with autism have more activity in the right hemisphere.

The new study aimed to see how these responses change during development. Eyler scanned 30 children with autism and 14 healthy controls between 13 and 46 months of age.

Healthy children tend to show activity in the superior temporal gyrus on both sides of the brain at very young ages, and then develop more left-hemisphere activity over time. In contrast, children with autism never show left-hemisphere dominance in this age range.

Studies pioneered by her co-investigator Eric Courchesne have shown that children with autism show an explosive growth in brain size between birth and age 2 years — particularly in frontal and temporal regions, such as the superior temporal gyrus.