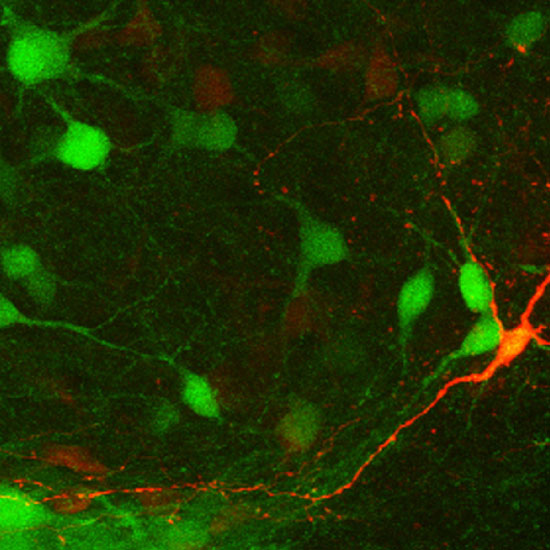 Limiting links:&nbsp;Curbing FOXP2 expression results in a dramatic drop in the number of interneurons, which dampen excitatory signals in the brain.

A gene tied to autism and language impairment is crucial for the early development and migration of inhibitory interneurons — cells that dampen the storm of electrical signals produced by the brain’s excitatory cells — according to research presented Monday at the Society for Neuroscience meeting in Chicago.

Interneurons come in more than 20 varieties, and each type is switched on at a precise time and place during development. Disruptions to different types of interneurons could account for the heterogeneous deficits seen in autism spectrum disorders, notes investigator Ian Weaver, a postdoctoral fellow in David Kaplan and Freda Miller‘s developmental and stem cell biology laboratory at the Hospital for Sick Children in Toronto.

Rare mutations in the FOXP2 gene cause severe speech and language problems, and mice carrying one normal copy of FOXP2 don’t vocalize as much as healthy pups do. In 2004, Chinese researchers found that a single-letter variation of the gene is associated with autism.

Previous work on mice has also shown that disrupting FOXP2 causes structural changes in several brain tissues, particularly the cerebellum, the region that controls movement. In the new study, the researchers tested FOXP2’s role in brain development — specifically, whether the gene controls how progenitor cells in the embryonic brain turn into different types of mature cells.

Looking at the brain tissue of embryonic mice, Weaver found enriched expression of FOXP2 in the cerebral cortex and the ganglionic eminences, both areas where interneurons are born. In subsequent experiments both in cultured cells and in vivo, he found that FOXP2 tends to be expressed along with known molecular markers of interneurons.

Finally, when Weaver genetically engineered cells in culture and in vivo to curb FOXP2 expression, he observed a dramatic drop in the number of interneurons in these brain regions.

These findings fit nicely with brain imaging data, which have found that people who carry FOXP2 variants and have verbal impairments show increased activity in their cortex. That could be a sign that the interneurons aren’t keeping the excitatory signals in check. “It may be that in those individuals that have less useful FOXP2,” Weaver says, “they may not have as much inhibition, and then have increased activity.”