Landscape of brain ridges may vary with gender in autism 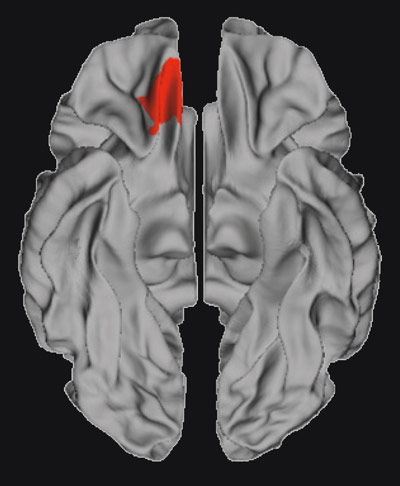 Cortical crannies: The complex folds in the brain’s outer layer may underlie some of the difficulties boys with autism have in interpreting social cues.

A region of the brain involved in interpreting social cues is unusually smooth in boys and men with autism, but normal in girls and women with the disorder. The findings, published 4 July in Molecular Autism, add to mounting evidence that autism manifests differently in boys than in girls1.

The results hint that abnormal brain folding underlies some of the difficulties boys with autism face in navigating social situations. “The structural alterations might make it tougher for males to understand social interactions, or to find them rewarding and salient,” says lead researcher Marie Schaer, visiting assistant professor of psychiatry and behavioral science at Stanford University in California.

Previous studies have uncovered subtle differences in the size and shape of various brain structures in males and females with autism. But these studies are small, with the largest including just 60 people with autism2.

In the new study, Schaer and her colleagues analyzed data from the Autism Brain Imaging Data Exchange (ABIDE), an open-access repository of brain images from individuals with autism and unaffected controls. This allowed the researchers to study patterns of brain folds, called gyri, among 106 people with autism.

Some researchers caution against drawing firm conclusions from the findings, however. The brain images analyzed in the study come from people who vary widely in age, and brain structure is known to change over time. What’s more, 17 teams from across the world collected the images using varying methods.

Schaer and her colleagues tried to control for differences in age and scanning protocol. But to rule out these confounders, their findings should be replicated in an independent sample of brain images collected in a uniform way, says Nicholas Lange, associate professor of psychiatry at Harvard University’s McLean Hospital, who was not involved in the study.

Still, the study is the largest yet to investigate sex differences in brain structure in people with autism. “I think it’s a very important contribution for the field,” says Meng-Chuan Lai, assistant professor of psychiatry at the University of Toronto. Lai was not involved in the study but served as a guest editor for the journal that published the findings as part of a special issue on sex differences in autism.

Know when to fold ’em:

In typical development, the brain becomes convoluted as it bulges within the confines of the skull. This process typically ends during the first year of life. But the brain’s outer layer, called the cortex, continues to grow in thickness until early adolescence. The cortex then begins to thin during adulthood.

Schaer and her colleagues analyzed brain scans from 53 boys and men, 53 girls and women, and matching numbers of controls, all ranging in age from 8 to 39 years.

The researchers compared each female participant with autism with a participant from each of the other groups, all of whom are the same age and were scanned at the same site.

For each participant, the researchers measured the volume, surface area and thickness of more than 300,000 points on the cortex. They also calculated the ‘gyrification index,’ which reflects the number and depth of cortical folds.

After adjusting for differences in total brain size, the researchers found that a region in the frontal lobe is smoother in males with autism than in either females with the disorder or controls of either gender. The region, called the orbitofrontal cortex, controls social motivation and helps to process social information.

Because cortical folds take shape early in life, the findings suggest that the autism-related sex differences begin in infancy. “Something is happening early on in the brains of males,” Schaer says.

The findings jibe with a study published in June showing that boys with autism have less folding in the prefrontal cortex — a brain region that includes the orbitofrontal cortex — than controls do3.

Previous studies have found the cortex to be thicker than usual in people with autism, but Schaer and her colleagues found no differences in cortical thickness among the groups. However, the superior temporal cortex, a brain region involved in language processing, is bigger in females with autism than in males with the disorder. Female controls show the same pattern relative to their male counterparts.